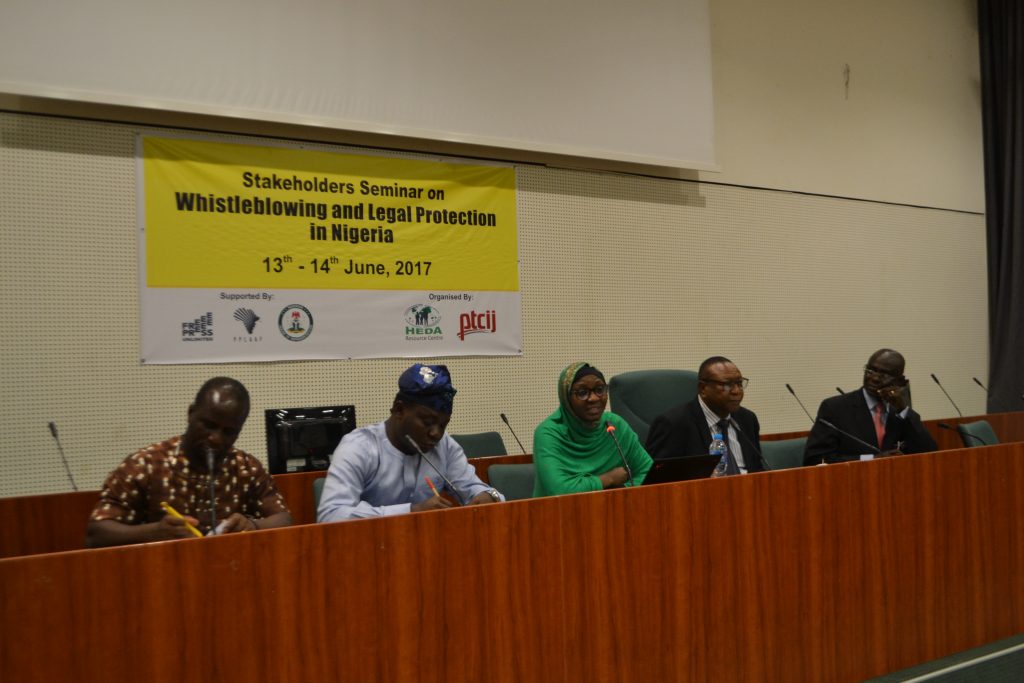 At Paradigm Initiative, we believe encouraging citizen engagement and transparency ultimately leads to a more accountable society. We remain resolute in ensuring that citizens are encouraged to speak up and expose improper and detrimental action in the society and that they are protected against sanctions for exposing societal ills.

It is against this background that we have been actively supporting advocacy for whistleblower protection in Nigeria, clause 10 sub-clause 17 of the draft Digital Rights and Freedom bill (HB. 490) makes provision for the protection of whistleblowers against sanctions.

It is important to note that the Senate is also in the process of passing a version of the bill, The Whistleblower protection bill SB 158. The bill makes provision for the protection of whistleblowers against any act of retaliation and ensures that their disclosures are appropriately handled and has a section which avails prospective whistleblowers right to anonymity. It is currently before the Committee on Judiciary, Human Rights and Legal Matters, awaiting Committee Report.

The seminar was declared open by Rt. Honourable Yakubu Dogara the Speaker, House of Representatives. He stated that the Bill for the protection of Whistle Blowers is a vital tool in the war against corruption in Nigeria and that when passed, will make more information available for investigation of alleged corruption and misuse of power by public servants. This was followed by the opening remarks by Hon. Kayode Oladele, the Chairman, House Committee on Financial Crimes. He said the Workshop was aimed at enriching the content of the Whistle blower’s protection bill which is critical in the fight against corruption. He gave the objective of the workshop as to enhance the synergy between the members of the House Committee and CSOs in tackling financial crimes in Nigeria and to give participants the opportunity to make an input to the draft bill and facilitate its passage.

The panelists said that the bill when it becomes law will tackle the issue of poverty and corruption in Nigeria and opined that a fund should be set up for Civil Society Organisations (CSOs) so as to empower them and in doing so tackle the root of corruption and that the government should create an enabling environment so that citizens will be motivated to report improper acts. Distrust between citizens and the Government and how this can hinder the whistleblowing process was outlined.

In this panel, the reporting process (lack of prompt response on the side of law enforcement agencies) was also identified as being a limiting factor. It was suggested that the gap between the time of reporting and time of response should be addressed by putting prompt response mechanisms in place.

Another panel was on “Espousing the internationally recognised guiding principles of whistleblowers laws”. This panel outlined the whistleblower protection situation compared with other Countries.

Day 2 started with a keynote presentation by the representative of the Chairman of EFCC titled “Citizenship and fight against corruption; promoting civil participation and protecting actors under a whistleblower protection law”. He affirmed the commission’s resolve against corruption and to support causes that align with the anti-corruption war, noting that the whistleblowing protection bill was a step in the right direction.

The first panel for this day was titled “Citizenship and ownership of the Anti-corruption war; an opinion on the incentive based policy”. Panellists pointed out that there was no dedicated agency outlined to report whistleblowing cases.

The second panel merged two panels together, which are: “Press freedom and whistleblower protection: Reviewing the provisions, standard and prospects of the laws and bills” and “Building a stakeholders engagement and strategy for enacting a whistleblower law: media and the law”. It was noted that the guidelines from the bill were gotten from transparency international. It was also identified that the draft bill did not make provision for anonymous whistleblowing and this was recommended. A broad definition of “retaliation” was also recommended to be defined as well as the fact that immunity should be given to whistleblowers from these retaliations.

A victimised whistleblower from a government commission then shared his whistleblowing experience.

The Panel on “Committing CSOs to partnership and expeditious passage of the bill” was the third panel for Day 2. Discussions ranged from how Civil Society Organisations can drive the anti-corruption campaign by advocacy and enlightenment. Panellists advised that CSOs need to come together to bring their strength (technical support) into the whistleblower protection law making and implementation process. They enumerated the need create a secretariat dedicated to the support of the policy.

The last panel was on “Whistleblowing in the corporate world; prospects and challenges”. A panellist shared reasons, why people are discouraged from whistleblowing, according to a study in key cities in Nigeria, was largely found to be fear of retribution and apathy. The panel identified the need to make room for independent reporting mechanisms so people who are willing can stand in for others who do not wish to be identified as whistleblowers in the bill.

Recommendations for an all-inclusive draft bill which speaks to every identifiable obstacle to its passage and implementation developed.

Whistleblowers face a number of challenges from threats, harassment, discrimination and sometimes outright dismissal by their employers. This implies that an effective protection system should be in place to prevent these instances. Although, the Federal Government had a whistleblowing program by the Federal Ministry of Finance (FMF ) at the moment which encourages disclosures of financial impropriety. There is no legal framework yet that backs whistleblowing in Nigeria, this is what the draft bill seeks to address. The FMF whistleblowing programme allows for disclosures to be made via an online portal, it also provides for anonymous disclosures and suggests that confidentiality will be maintained to the fullest extent possible within the limitations of the law.

There are bills similar to the whistleblower protection bill currently before the National Assembly; they include the Witness Protection Programme (Establishment etc), SB 157, which was passed on Thursday, 8th June 2017 following a report submitted by the committee on human rights, legal matters and judiciary. Another similar bill is the Public Interest Disclosure Bill, HB 03 which allows for people with disability to make disclosures.

Paradigm Initiative identifies with the need for accountability in all aspects of public and private bodies and officers’ conduct. We understand that for the anti-corruption drive to be achieved in Nigeria, people must be encouraged to speak up against improper actions. Also, those who wish to speak up shouldn’t be compelled to identify themselves and should be given equal opportunity. Clause 4 sub-clause

3 of the Digital Rights and Freedom bill (HB. 490) provides for anonymous speech online. We will continue to support and engage ongoing advocacy effort for the protection of whistleblowers in Nigeria especially online.

Oluwaseun Ajayi is a Google Policy Fellow with Paradigm Initiative. She works with the Magoyi team in our Abuja office.