The Politics of Twitter Hashtags in Ghana. #FixTheCountry, #Fixyourself, #Nameandshame 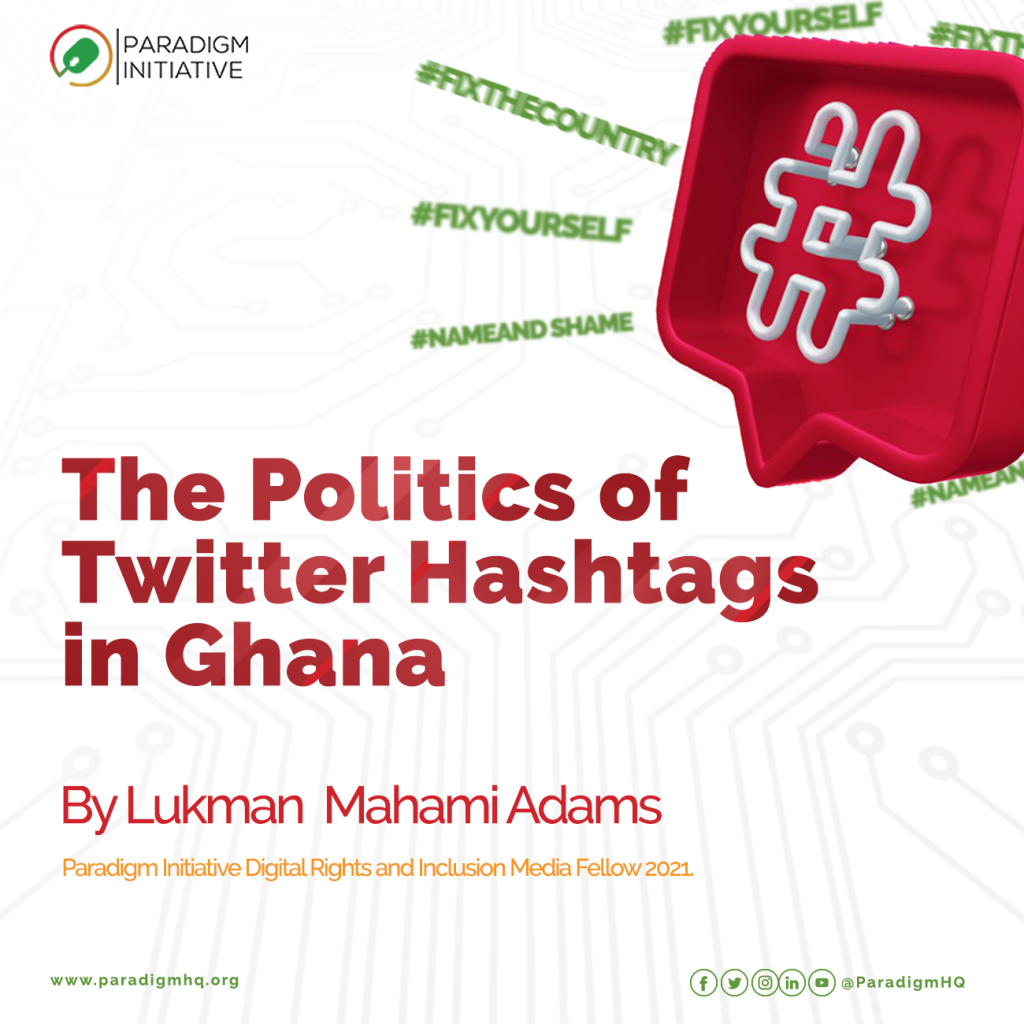 Social media fanatics will forever be indebted to Christopher Reaves Messina for proposing hashtags to the internet and social media. Since hashtags emerged, social media users across the globe have leveraged it to set topics for discussions on various social media platforms and hashtags are quite easy to generate. As a social media user, you simply key in the hash symbol ‘#’ in addition to any word, phrase or sentence of your choice to set a discussion rolling. For instance, #HappyMother’sDay can be a hashtag for discussions on Mother’s Day. For others to join similar discussions, they simply start with #HappyMother’sDay in addition to any text, image or video. Hashtags are permissible on almost all social media platforms including Instagram, Facebook and Twitter. Positive hashtags have contributed to the development of many societies as it has helped create awareness on development issues that were either unknown or totally neglected by state authorities and thus the relevance of hashtags need not be understated.

Early in May 2021, Ghana’s Twitter community has been blazing with hashtags which are in relation to governance and the country’s development. They include; #OccupySaglemiNow, #FixtheCountry, #NameandShame, #Fixyourself, #HeisFixingIt, #WeareAngry, #FixMotherGhana among others. Notable amongst them is #FixtheCountry which is basically an online protest calling on the government of Ghana to fix issues such as erratic power supply, locally known as ‘Dumsor’, reduce and scrap nuisance tax, construct roads, build schools and hospitals, increase wages and salaries among others. As at May 5, 2021, checks revealed that the online protest generated 141,000 #FixtheCountry tweets. #FixtheCountry made it to headlines of various media portals such as citinewsroomonline.com, myjoyonline.com, starrfm.com.gh and television stations such as Joynews, Tv3, UTV, GhOne, Metro Tv and AdomTv. It has been the talk of town in the country for about a week now. #FixtheCountry has been changing in nomenclature but not in intent. #FixtheCountry has resulted in new hashtags like #FixtheCountryNow, #NameandShame, #FixIt, #FixtheCountryGhana, #WeareAngry. Many of these protesters alleged that the constant change in hashtag was because the original hashtag they commenced with, #FixtheCountry was flagged by Twitter which they did not find acceptable and meaningful. Some tweets were directed at Jack of Twitter as they wanted to know why their hashtag had been flagged. The most recent change in hashtag was smartly to leverage on Mother’s Day Celebration which was on May 9, 2021. The hashtag for the day was #FixMotherGhana.

Since it’s a protest against the government of Ghana and also happening in a country which is widely regarded as the beacon of African democracy, it is not surprising to see counter hashtags from government officials and pro-government persons and groups. Opponents of #FixtheCountry began with #FixYourself which simply told the protesters to rather fix their attitudes such as putting an end to bribery, paying of taxes just to mention a few instead of calling on government to fix the country. To the people of #FixtheCountry, this counter hashtag, #FixYourself was irresponsible and insulting as it came with messages such as ‘respect your elders’. For this reason, #FixYourself tweets were mostly met with unpalatable feedbacks. #FixYourself tweets were also deleted by the owners and apologies rendered. That notwithstanding, the unpalatable exchange of tweets continued among some social media users. That’s the beauty of Digital Freedom in Ghana despite its minor setbacks such as fake news, hate speech and supposed unlawful surveillance by the government.

The government invited the conveners of #FixtheCountry to a meeting in which the Ministers for National Security, Finance and Justice were present. Speaking on JoyNews’ Newsfile show, Oliver Barker-Vormawor, Lawyer and Convener for #FixtheCountry indicated that plans are underway to sue the government for unlawful surveillance. According to him, after their meeting with the government, an android phone belonging to a member of their team was cloned. He further stated that all calls to that phone had been diverted to a different number. This was realized after their phones were taken by the national security before they entered the meeting. However, the Ministry of National Security through the Ministry of Information issued a statement denying the allegation of cloning of phones. They again stated that the collecting of phones is consistent with the standard practices of the ministry. This comes at a time were issues of digital surveillance are fast developing in Africa and thus digital right activists are waiting to see the outcome of the intent to sue by the conveners of #FixtheCountry.