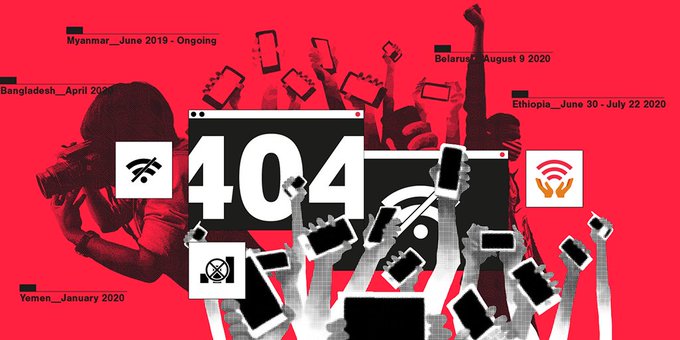 It is not an overstatement to say that if there is any word that most Tanzanians are coming into contact with — or forced to use — for the first time then is VPN or virtual private network, a technology that gives internet users online privacy and anonymity. Thanks to the ongoing heavy restriction on the use of the internet by Tanzanian authorities during the general election, most Tanzanians, both technologically savvy and ignorant, struggle to download VPN and install it on their mobile devices so that they can be able to access various social media platforms whose use Tanzania has reportedly restricted.

News on the likely restriction on the use of social media first came to light on Tuesday, October 27, 2020, as various people, especially on social media, reported to have had difficulty accessing the platforms. NetBlocks, an international non-governmental organization that monitors cybersecurity and the governance of the Internet, confirmed what it called “widespread disruption to social media and online communication platforms” via multiple internet providers as of Tuesday.

NeBlocks’ analysis revealed that real-time metrics showed that Twitter, WhatsApp, backend servers for Instagram, and some Google services, including Gmail and Translate were generally or partially. This was true for any user of Tanzania’s leading network operators like Vodacom, Airtel, Tigo, Halotel, and Zantel. While other social media companies are yet to comment on the situation, Twitter said Tuesday that it had observed “some blocking and throttling” of the platform. In a statement, Twitter said: “Internet shutdowns are hugely harmful, and violate basic human rights and the principles of the [open internet.] The government is yet to comment on the matter as of the time of writing this. Nor are the network operator who has been on the receiving end of various inquiries and even accusations from their customers. Many of them, however, acknowledged experiencing “network issues,” promising to work on it.

The restriction on the use of the internet came hardly three days after another development was reported by users of Tanzania’s largest mobile network operators Vodacom Tanzania and Airtel Tanzania preventing users from sending mobile text messages which carried the name of some of the opposition presidential candidate Tundu Lissu and Maalim Seif Sharif to their contacts. The move by Vodacom and Airtel came two days after Tanzania Communications Regulatory Authority (TCRA) wrote to telecoms ordering them to temporarily suspend bulk short messaging services (SMS) and bulk voice calls from October 24 to November 11, 2020. TCRA’s director-general said in the letter which was addressed to Viettel Tanzania PLC which trades as Halotel that the move was aimed at curbing the “adverse impacts” of the services during general elections.

Back in August 2020, some digital rights activists in the country were already worried that the government might restrict the use of the internet ahead of the 2020 general election. This is so despite the fact that Tanzania does not have legislation that gives the government power to shut down the internet, according to a Lagos-based digital rights advocacy group Paradigm Initiative (PIN). Still, the Electronic and Postal Communications (Online Content) Regulations, 2020 give the Tanzania Communications Regulatory Authority (TCRA) power to order service providers to block or filter content if the TCRA deems such content is prohibited, the digital rights organization, quoted a human rights lawyer Daniel Marari as saying. Mr. Marari told Paradigm Initiative then:

“The way it works is that the law allows TCRA to delegate censorship powers and powers of content removal to service providers. It can direct service providers, or internet service providers, to filter and block access to certain services/websites or remove certain content. If they don’t comply, they risk sanctions. [This is] an indirect way of blocking access to online content or services.”

It was the fear of restriction on the use of the internet experienced right now that moved Ms. Zaituni Njovu and her colleagues at Zaina Foundation, a local organization that champions digital rights and inclusion, to adopt and launch the #KeepItOnTZ in Tanzania to make sure that the government does not shut the internet down as it can have unspeakable effects on people’s participation in the upcoming election.

Access Now, a global digital rights organization, criticized what is currently happening in Tanzania, saying it stiles people’s fundamental rights and freedoms. “Telecom service providers operating in Tanzania have a responsibility to respect the human rights of Tanzanians, and must take all possible measures to prevent and mitigate government attempts to censor millions,” said the organization in its October 27 statement. “[We] invite the international community to join the call: telecommunications companies must resist Magufuli-government censorship requests, and allow people to freely and securely access communication platforms throughout the election period and thereafter.”