Home » Advocacy » Paradigm Initiative’s Statement to the African Commission on Human and Peoples’ Rights on the Human Rights Situation in Africa at the 71st Ordinary Session.

Paradigm Initiative’s Statement to the African Commission on Human and Peoples’ Rights on the Human Rights Situation in Africa at the 71st Ordinary Session. 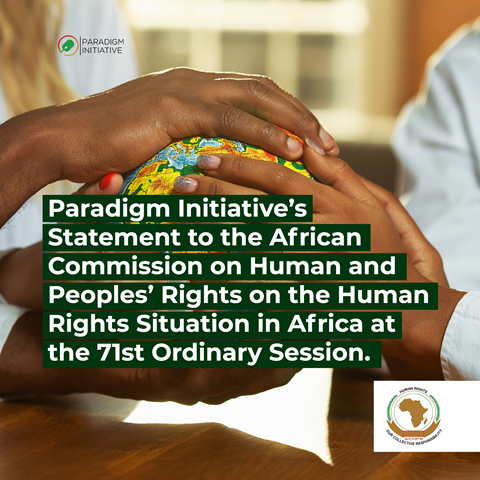 To the Honourable Chairperson of the African Commission on Human and Peoples’ Rights (ACHPR), Special Rapporteur on Freedom of Expression and Access to Information, and Commissioners of the ACHPR.

Paradigm Initiative (PIN) welcomes the Inter-Session Activity Report of Commissioner Ourveena Geereesha Topsy-Sonoo, the Special Rapporteur on Freedom of Expression and Access to Information, and her commitment to working with all stakeholders.

PIN is deeply concerned about the incidence of Internet Shutdowns in many African countries. The trend of these Internet shutdowns is particularly worrying, and notably, they occur during elections and protests, interfering with freedom of expression, access to information, freedom of association, and peaceful assembly. In Tanzania, during the presidential elections of 28 October 2020, there were Internet disruptions that blocked access to platforms like Twitter and WhatsApp while the government of  Uganda, on the eve of their general elections on 13 January 2021, shut down the Internet with no justification and in blatant disregard of international standards which call for an application of the test of proportionality, necessity and legality before limiting freedom of expression and access to information.

This Commission, in the Declaration on Freedom of Expression and Access to Information, has highlighted in Principle 38(2) that States must not engage in or condone any disruption of access to the Internet and other digital technologies for segments of the public or an entire population. Yet we see States going against this guidance in violation of Article 9 of the African Charter on Human and Peoples’ Rights (African Charter). We acknowledge that the ACHPR has emphasized the need for countries like Chad, Sudan, and the Democratic Republic of the Congo to respect Article 9 of the African Charter and yet the practice persists. In Nigeria, the government banned Twitter on 4 June 2021, an action which violated Article 9 of the African Charter, and Paradigm Initiative filed a case against the government of Nigeria with the ECOWAS court under case number ECW/CCJ/APP/29/21. On 12 August 2021, the government of Zambia shut down the Internet during the presidential elections, interfering with freedom of expression and access to information.  To silence pro-democracy protests in 2021, the government of Eswatini shut down social media platforms including Facebook, WhatsApp, and Twitter.

Paradigm Initiative applauds the government of Ghana which has in the past committed not to shut down the Internet during elections. However, 10 African countries and State parties to the African Charter disrupted Internet access in 2021 alone, including Ethiopia, Eswatini, Chad, the Democratic Republic of the Congo, Gabon, Niger, Senegal, Nigeria, Uganda, and Zambia, as reported in a Study on Internet Shutdowns in Africa 2021 published by the African Internet Rights Alliance, which Paradigm Initiative is a member of. These disruptions were occasioned by repressive telecommunications and other legislation, and policies unjustifiably limiting freedom of expression and access to information.

For any further comments, PIN is reachable via email to Thobekile Matimbe, Paradigm Initiative’s Community Manager at thobekile.matimbe@paradigmhq.org.

PrevPreviousThe Declaration for the Future of the Internet is a Call For Reforms.
NextFollow PIN’s Sessions and Participation at RightsCon 2022Next