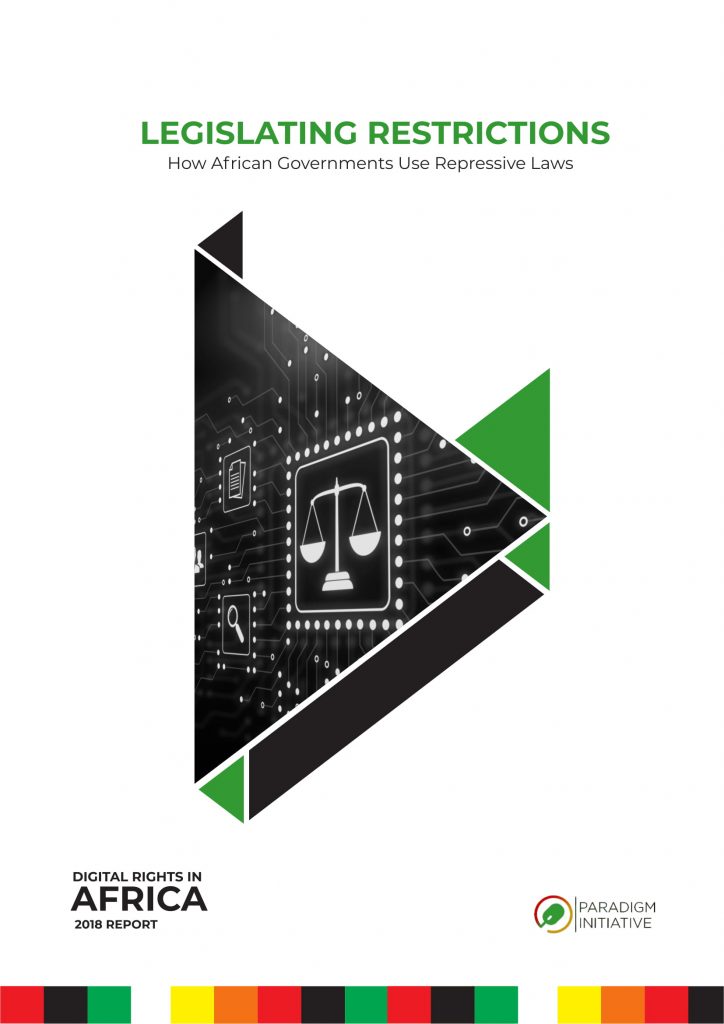 Many African governments have rolled out legislation and policies which enforce privacy violations, infringements to freedom of expression, access restrictions and hurt other digital rights, the Digital Rights in Africa 2018 report has revealed. The report prepared by Paradigm Initiative was launched at the Internet Governance Forum in Paris on Tuesday, November 13.

The report titled “Legislating Restriction: How African Governments Use Restrictive Laws,” is the third edition of the Digital Rights in Africa report.

According to  ‘Gbenga Sesan, the Executive Director of Paradigm Initiative, “The 2016 and 2017 editions focused on Internet Shutdowns and Citizens fightback against digital rights abuses. The 2018 edition focuses on how governments across Africa have transitioned from solely brutal tactics of arrests, Internet and social media app disruptions, and imprisonment to more refined, subtle and apparently “legal’’ approaches – or those that supposedly respect the “rule of law’’ – in stifling digital rights in Africa.”

In the Democratic Republic of Congo, Egypt, Morocco, Tanzania and beyond, governments have begun to roll out legislation and policies which enforce privacy violations, infringements to freedom of expression, access restrictions and hurt other digital rights.

According to Tope Ogundipe, the Director of Programs of Paradigm Initiative, “Our 2018 Digital Rights in Africa Report takes a look at this trend across Africa and discusses the way forward for civil society as we continue in the fight for digital rights and freedoms on the continent”.

This report highlights 8 countries across North, East, West and Central Africa where critical developments in the legal or policy space have conspired to hurt digital rights. These countries are Egypt, Morocco, Nigeria, and Benin. Others are Uganda, Tanzania, Cameroon, and the Democratic Republic of Congo. The 48-page report is published in English and French and is available for free download on the Paradigm Initiative’s website.

The report also bemoans the role certain actions of China, Russia and the United States have impacted on rights in other rights in African countries.

According to the report, “The surprise withdrawal of the United States from the United Nations Human Rights Council is another stark symptom of the strange times we are in… Beyond the United Nations Human Rights Council, the United States has lost some of its moral authority as an arbiter and defender of global human rights as a result of happenings within its own borders. These developments have emboldened hitherto repressive, but hesitant, state actors into acts that brazenly attempt to restrict human rights online and offline.”

“The increasing influence of China and Russia in global affairs is definitely changing perceptions about the thresholds of what is acceptable or not in human rights standards. Even more so, it would seem many African countries have begun to borrow a leaf from repressive foreign governments’ playbooks for violating digital rights,” the report continued.

The report also laments the slow passage of laws with the potential to uphold digital rights, noting that, “Interestingly, as states across the continent rush towards the passage of legislation which violate digital rights, simultaneously, they have either refused to implement calls for the enactment of legislation which protect digital rights or have introduced delays in the passage of such laws and policies. For instance, there are only 23 countries with data protection legislation in effect on the continent, whereas data protection has become a crucial foundation for life in our digital age and the successful working of the digital economy.”