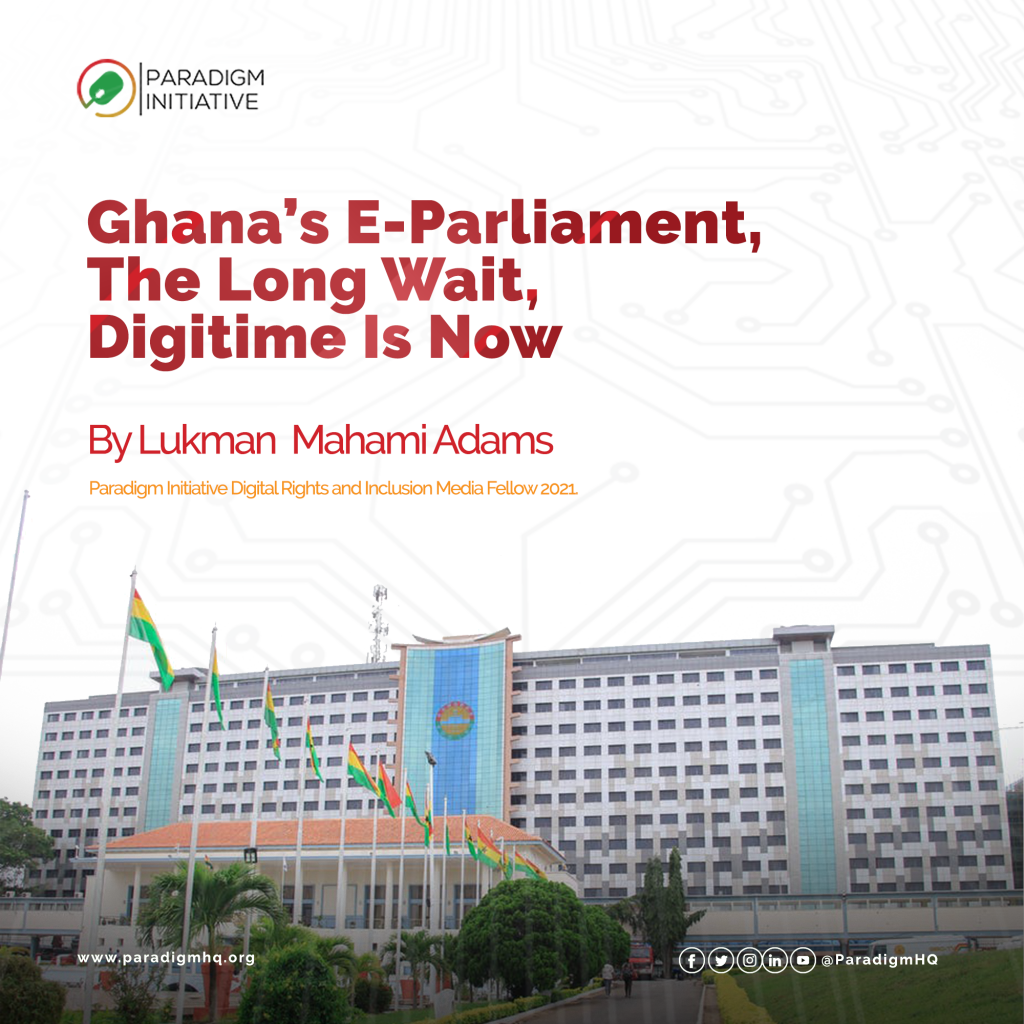 Is there any sector that can say no to ICT? Certainly, your guess is as good as mine. Yet, some sectors are unimaginably trying so hard not to appreciate or derive the full benefits of embracing ICT.  Campbell et al. (1999) argue that politics and governance are not immune to the positive impact of ICT and thus nation-states ought to overwhelmingly embrace the concept of a digital revolution. This article seeks to analyze the concept of a digital revolution in a West African state, the Republic of Ghana, thus e-Government in Ghana, by examining the use of electronic technology in Ghana’s Legislative arm of Government known as the Parliament of Ghana. According to the Organization for Economic Cooperation and Development (2003), ‘e-government is the use of information and communication technologies (ICTs), particularly the internet to achieve better government’.

This article argues on the notion of e-Parliament as highlighted by the United Nations Development Program (UNDP).

E-Parliament entails the establishment of a virtual network which would act as a platform for MPs to exchange information and experiences, and would also provide relevant information on social, economic and political issues such as the environment, health, democracy and conflict (United Nations Development Program, 2006 p.9).

This basically means that e-Parliament is the use of ICT tools in performing the functions of a Parliament which includes legislation, representation and oversight. ICT is certainly not alien to Ghana because the country, through its Ministry of Communication and Digitalization under the leadership of Hon. Ursula Owusu-Ekuful, has achieved enviable feats in digitization under its ‘Digital Ghana Agenda’.  Examples of such feats include the introduction of paperless systems at the country’s ports, Assase Ghana Post System Application and Biometric National Identification Systems (MOC). Other notable achievements in ICT infrastructure development include the ICT for Accelerated Development (ICT4AD) in 2003, the e-Government Strategy in 2005 and GeGov in 2008. Despite the numerous aforementioned interventions, surprisingly, the Parliament of Ghana is entirely not an e-Parliament. Although some MPs use laptops, tablets, among others during proceedings, this article argues in the remaining paragraphs to establish that Ghana has no e-Parliament. At best, Ghana has a Parliament which constantly provides information and live broadcasts of Parliamentary proceedings to the online public via its various social media pages.

A profound principle and characteristic of Information and Communication Technology is that it reduces human interface when possible. The current COVID-19 pandemic has widely exposed the ICT deficiencies of countries that hitherto downplayed the impact of ICT.  As a Member of Parliament, voting in matters concerning the house is an obligation that is not taken for granted by leaders of the various sides of the house. The Chief Whips in Parliament are well known for ensuring that all members are present anytime there is a call for vote in the house. Recently, the Minority Chief Whip in Parliament, Hon. Alhaji Muntaka Mubarak blamed their failure to leverage their numbers in the house to reject President Akufo Addo’s 2021 Budget Statement and Financial Policy on the absence of some minority MPs during headcount for the approval of the budget.  According to him, some MPs were in self-quarantine whiles others were attending to equally important matters. In most situations, some MPs are either outside of the country or attending to other functions and this is not peculiar to only the Minority side but the Majority as well. The reasons given for the inability of MPs to vote on matters in the house is quite prehistoric and unpardonable to be uttered in today’s ICT driven generation. MPs are elected to represent constituencies and do not represent the interest of his/her constituents in a vote due to their physical absence on the floor of Parliament. This depicts the unfortunate gap in the use of electronic technology in Ghana’s Parliament.

Due to advancements in ICT, most institutions now have portals and web applications that are convenient since they can be used at all places once there is a stable internet connection. How about a portal for MPs or a Parliament of Ghana application? This will not only enhance the functions of the august house but will project the corporate image (brand) of the Parliament of Ghana and the country at large. This can even limit the frustrations of most members of the society who have no regard for the Parliament of Ghana. An average Ghanaian hearing an MP say he/she could not take part in a vote due to physical absence will certainly impugn the functions of the august house due to the wide appreciation for ICT in Ghana. Although the Parliament of Ghana might be somewhat late when compared to the global north in terms of electronic technology, Ghana might not be late amongst its peers in the global south because the digital revolution is here to stay.

Moreover, Reporters without Borders (2018) describe Ghana as the beacon of democracy in Africa and ranks Ghana top amongst its peers. This means that Ghana’s democracy is associated with a formidable brand, thus complementing it with advanced digitization will do wow for the country.  As suggested by former Speaker, Rt. Hon. Professor Aaron Michael Ocquaye, this can be done with the help of the Ghana-India Kofi Annan Centre of Excellence in ICT (AITI-KACE). In February 2018, Rt. Hon. Professor Aaron Michael Ocquaye, further argued that e-Parliament will enhance the record-keeping of the house. e-Parliament in Ghana is needed now like never before and must be treated with the needed urgency.

A news publication dated January 31 2020, on Ghana News Online reads ‘Ghana’s Parliament goes Paperless, MPs to undergo IT training’. This was a 4-day IT training program organized for MPs. Hopefully, this suggests that e-Parliament is in Ghana’s common political adage ‘pipeline’ or ‘offing’. An average Ghanaian who hears ‘it is in the pipeline/ it is in the offing’ completely gives up till it finally comes out of the pipeline.  News of Ghana’s Parliament adopting electronic technology dates back to the sixth (6th) Parliament of the Fourth (4th) Republic of Ghana. (Ahiabenu 2016). Could it be that Ghana’s e-Parliament has been in the pipeline for quite a long time? If true, when best can it successfully be out of the pipeline to enhance the brand of the country’s legislature for e-Parliament in Ghana is long overdue.