Gender Digital Divide – A Gap that Should be Bridged 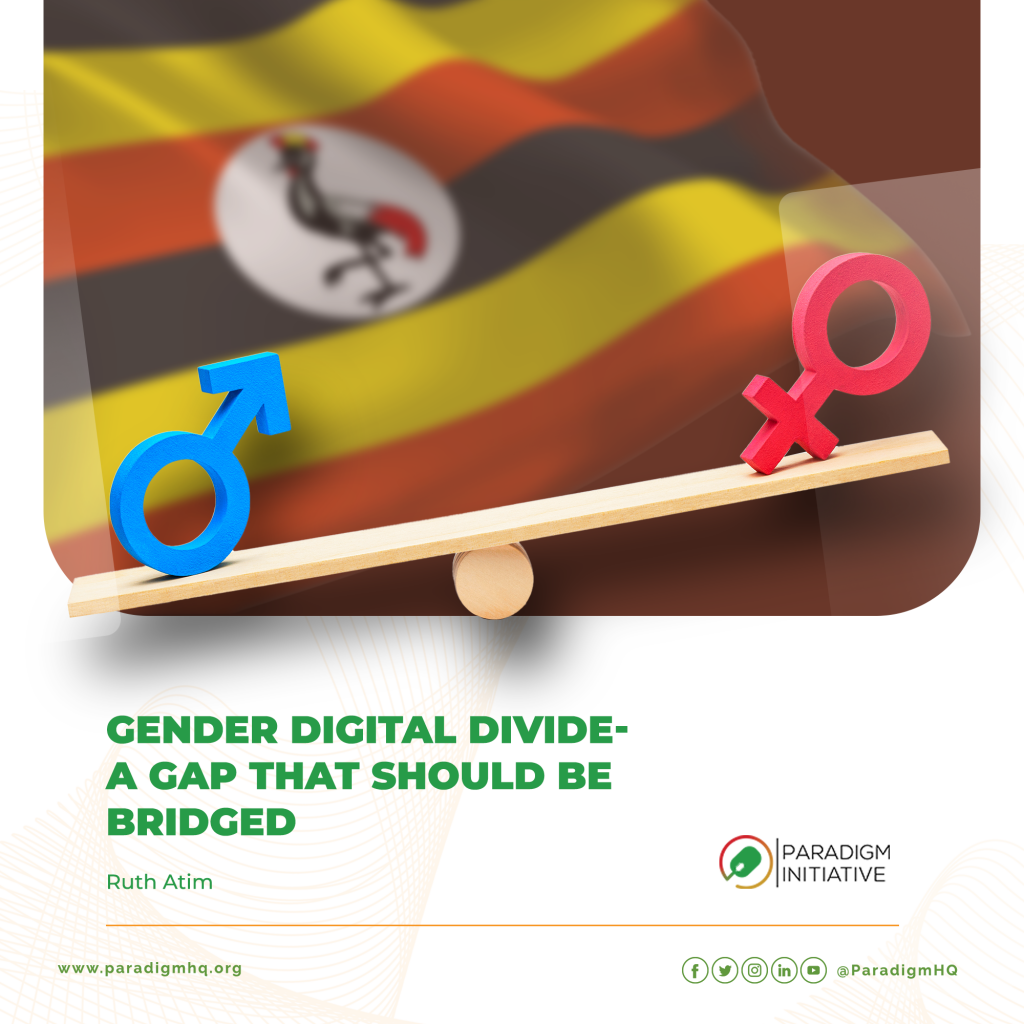 There are many challenges curtailing the fight against gender inequality in Uganda but the Gender Digital Divide Gap has been recognized as a challenge to achieve gender equality for women, particularly now that everything has gone virtual.

According to a survey by World Wide Web, Only 19% of Ugandan women are online, compared to the 27% of Men. The survey findings state that Uganda by far has the largest gender gap in internet access among the countries included in the survey of women’s online experiences.

Take mobile phone connections for example. While 69% of women own phones, only 19% are able to use them to access the internet.  The gender gap in mobile ownership reinforces the fact of unequal access but also paints an incomplete and misleading picture.  The digital divide is thus not simply a question of access to digital technologies but also about the capacity to make meaningful use of the access to technology.

Unless this digital gender divide is bridged, Uganda’s aggressive push towards digitization will further entrench the political, economic, and social marginalization of females.

Aida Bukubuza, the founder of Aydia Gender Tech Initiative says that the Internet is particularly relevant to social, economic and human development and in order to fully benefit from its development potential, it must be accessible, available and affordable for all persons.

“Gender norms that are deeply entrenched in patriarchal societies often restrict and affect equitable access to technology for women and girls, particularly those from underprivileged and resource-poor backgrounds. They manifest in girls having low digital literacy rates, lack of familiarity with the digital tools, and unequal access to digital or electronic devices” Aida Adds.

ICTs and access to the internet provide the basic infrastructure that when appropriately used can offer benefits for women in all spheres of life. The internet has real potential to mitigate or even remove barriers that have precluded women from participating more fully in a digital society.

The recent growth in the mobile industry has driven an unprecedented increase in Mobile phone usage in Uganda.  Almost 24.8m or 70.9 per cent of Ugandans own mobile phones, a report by the National Information Technology Authority Uganda (NITA-U).

While mobile phone ownership and mobile internet use have increased significantly, there is still a persistent gender gap. Women’s lower levels of mobile ownership and use not only reflect existing gender inequalities but also threaten to compound them. If the mobile gender gap is not addressed, women risk being left behind as societies and economies digitise.

There are several distinct barriers to mobile ownership and use that affect a disproportionate number of women. These impediments to mobile connectivity will not be overcome on their own; concerted effort and cooperation will be required to drive digital inclusion for women.

Lindsey Kukunda, Founder at Her Empire says she has trained more than 200 women journalists, Human Rights Defenders, university students etc and the problem is money.

“Women don’t have economic power, too many don’t own laptops and have poor quality phones and sometimes no smartphones at all yet the men have a variety of gadgets, the women have the basics or nothing” Lindsey adds.

More Reports also show that women tend to use mobiles and the internet differently than men. For example, limited by less expensive and sophisticated handsets, women use a smaller range of digital services (often primarily voice and SMS). Women also use digital services less often and less intensively, and they access the internet less frequently, for fewer reasons.

Addressing the gender digital divide is crucial to ensuring the sustainability of women’s livelihood. This is particularly the case during crisis such as the COVID-19 pandemic when connectivity is key. At times like this, we need to emphasize the importance of digital access for women.

It is evident that the gender digital divide has increased over the last few years, with more women and girls, being left behind. Factors such as the high costs of data, digital illiteracy, as well as online-based violence have forced many women and girls off the internet. Although Uganda has several laws and policies that provide for gender equality, none of them is specific about the digital gender divide, including the ICT Policy and Vision 2040.

In order to bridge the digital gender gap, government leaders, and all other relevant stakeholders must get to understand the barriers to access and develop the public policies, tools and interventions that promote more gender inclusivity.