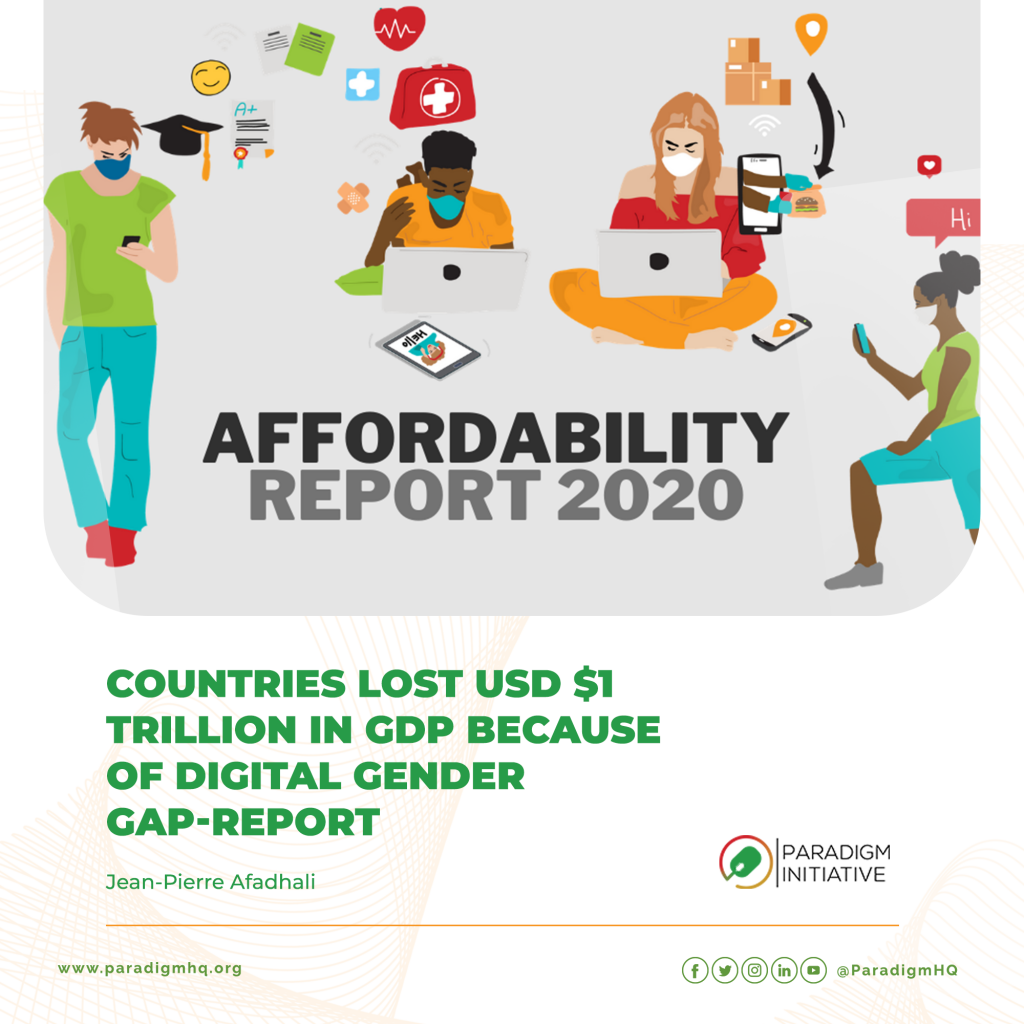 African governments and other developing countries are losing hundreds of billions of dollars due to girls and women’s digital exclusion, a new report released on Monday 11 Oct. on International Day of Girl Child revealed.

Data from the study conducted by Alliance for affordable Internet (A4AI), a global coalition that works to reduce the cost of Internet show that men are 21 percent more likely to be online than women globally, rising to 52 percent in least developed countries. The research that was conducted in 32 countries reveals that countries have missed out on $1 trillion USD in GDP as a result of women’s exclusion from the digital world. In 2020, the loss to GDP was $126 billion USD.

The new report launched earlier this week notes that various barriers that prevent women and girls from accessing the internet and participating online, include unaffordable devices and data tariffs, inequalities in education and digital skills, social norms that discourage women and girls from being online, and fears around privacy, safety, and security.

“There is a substantial digital gender gap and it’s not getting better.” The research authors “In the 32 countries we studied, just over a third of women were connected to the internet compared to almost half of men. Since 2011, the gender gap has only dropped half a percentage point, from 30.9 percent to 30.4 percent.”

According to the study the exclusion of women online means billion in lost taxes that could be invested to improve education, health, and housing. “This lost productivity translates to a missing $24 billion in tax revenues annually for these governments, based on current tax-to-GDP ratios.”

The Alliance for Affordable Internet states that the inclusion of women would be an opportunity for countries’ economies. “Policymakers have a $500 billion+ economic opportunity. Closing the digital gender gap in these countries would deliver an estimated $524 billion increase in economic activity by 2025.”

The International Telecommunications Union’s regional estimates for Africa put the gender ratio at nearly three-to-two in favor of men over women. While the GSMA, an organization that regroups mobile network operators estimates that around 234 million fewer women in low- and middle-income countries use the mobile internet than men. This divide is most stark in sub-Saharan Africa and South Asia where the gender gap persists over 55 percent more men than women, revealed the new report.

A4AI estimates that, over the last decade, least developed economies have lost a total of $1 trillion USD in gross domestic product (GDP) to the gender gap in internet use. Based on current tax-to-GDP ratios in these countries, this loss represents an estimated $24.7 billion in lost tax revenue in 2020 signaling a huge loss due to digital gap.

“We use women as the reference group in order to put the focus on the disparity and disadvantages faced by women.” Noted the report authors

However, the report notes that positive policy examples do exist for ways to close the digital gender gap in some countries. Leaders in this area include Botswana, Costa Rica, and Senegal: all of which include clear targets for women’s inclusion within their national broadband plans.

According to the study, Botswana’s national broadband strategy includes gendered targets for smartphone access, digital literacy, and ICT graduates, and the Digital Senegal plan includes a high-level commitment to mainstream gender in all broadband policy decisions.

In Rwanda, half of the positions within the government-backed Digital Ambassadors program- an initiative that aims to bridge digital gap are reserved for women to enable them to be advocates within their own communities and networks to encourage other women and girls to come online.

“These examples demonstrate what can be done in words and in action to reduce the digital gender gap,” suggests the report

The study on gender digital gap recommends governments to consider digital economy as an engine for growth in the post-Covid recovery, and keep women’s access in mind.

“In addition to helping women simply connect for the first time, governments should also work to eliminate the barriers preventing women from having a truly meaningful internet connection.” Read part of recommendations “Women that only benefit from a marginal connection are also unlikely to reach their full potential economic or personal.”

According to the report estimates, the digital gender gap in least developed countries will shrink from 30.4 percent to 20.6 percent by 2025. This will mean that the GDP lost to the gender gap will also be less in 2025 than what it is today. Despite this, by 2025 the cost of exclusion will remain high, at an estimated $99 billion USD.

Despite the barriers that exist, women are increasingly using the internet to seek opportunities in the digital economy.

“In interviews and focus groups commissioned by A4AI-Web Foundation in 2021, women used the internet to further their economic prospects across a wide range of sectors, across different geographies and cultural backgrounds.” Noted the report