The Need to Act Inclusion for Persons with Disabilities 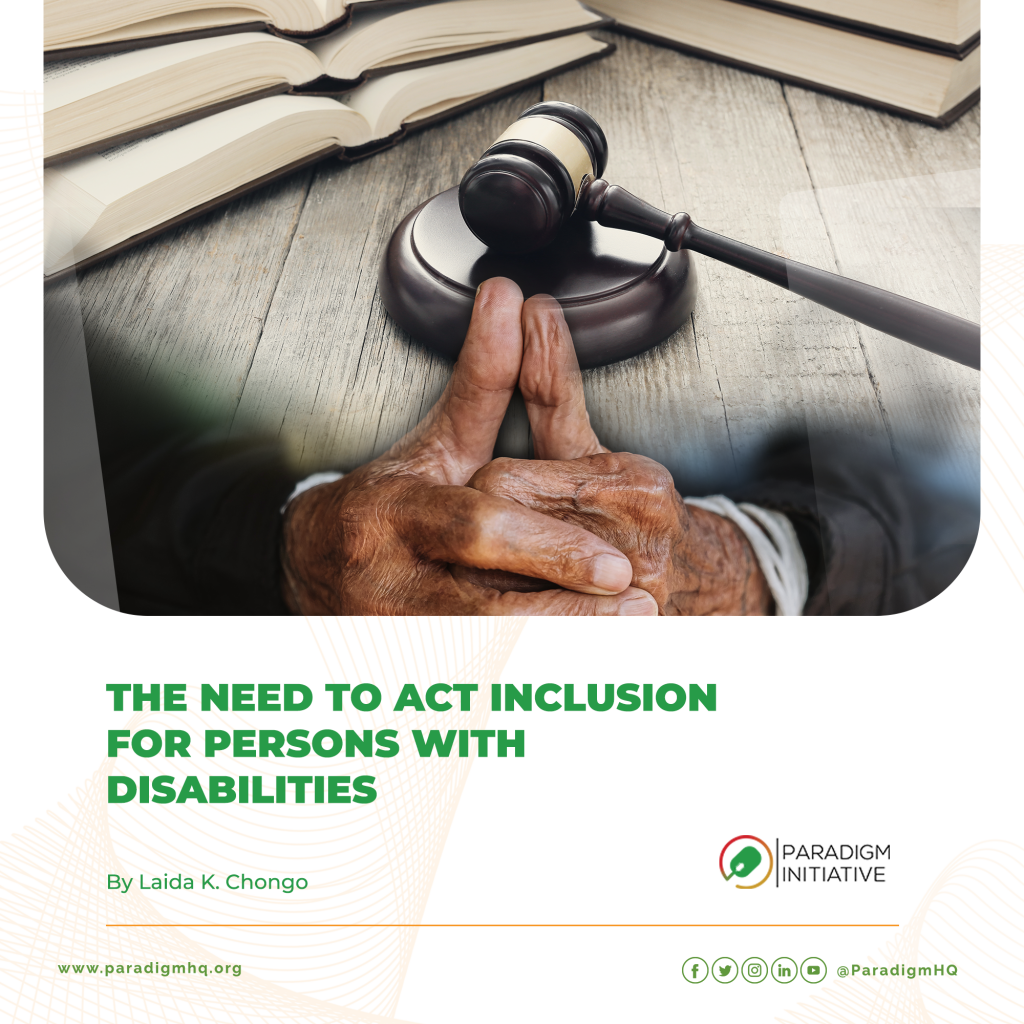 In a world full of digital solutions, life is as good as stagnant if one cannot adapt to new technologies that now connect the world and make things happen. A large number of people with various disabilities remain disadvantaged when it comes to accessing ICT’s. Dr Feza T Azmi in her article on the subject of digital access to ICT’s for persons with disabilities contends that globally, about 15 per cent of the population lives with some form of disability of this figure, 80 per cent live in developing countries.

Their state has made society hinder them from fully participating and achieving their full potential in life. Some of the barriers faced by persons with disabilities are best removed by the use of assistive technologies. The coming of the Covid-19 pandemic has taken its toll on the situation and hence exacerbating it to alarming levels.

For a country like Zambia whose debate on all-inclusive digital transformation has been waging for some time now, the window for calling for a digital just society is closing in.

It remains to be seen whether many acts and clauses will be implemented in support of people with special needs.

In addition to the laws and policies such as the Persons with Disabilities Act No. 6 of 2012, and the National Policy on Disability that Zambia has, like many other countries it has ratified the United Nations (UN) Convention on the rights of persons with disabilities.

With a new Ministry of Technology in place, the question of how best Zambia can become more inclusive in terms of digital rights remains on the lips of everyone. It is not a new question, but a fairly old one begging for a more pragmatic approach as the current ones are not adequate.

Mr Thomas Mtonga, a respected academician also known as the first-ever blind lecturer at Zambia’s highest institution of learning, the University of Zambia (UNZA), wrote on his Facebook page on April 18th,2020 and he said:

“Most of the time, people with disabilities are at the peripherals of information receiving and usually, they are considered at the very last minute for anything good in society.”

The wisdom and foresight in that thought were relevant then and even more relevant now. He could not have said it better. What caught my attention in his write up is that he expressed the need to train people with disabilities how to cope with times so that they in turn can teach other people with similar disabilities.

More about Mr Mtonga here explains how he has managed to overcome many challenges as a person with a disability.

Mr Wilson Macharia, a visually impaired tutor at the Centre for  Human Rights, University of Pretoria equally accorded me a heartwarming chit-chat about how the differently-abled are generally excluded in all sectors of life.

What makes his story much more interesting is that he has defied odds.

Mr Macharia is a consultant in disability rights and an LLD candidate. He has been involved in designing and implementing key projects and policies aimed at eliminating the barriers that impede the full and effective participation of persons with disabilities.

What are some of the hardships you had to overcome that you perceived as hindrances in your journey of success?

Undoubtedly, I have faced setbacks in the process of advocating for inclusion, often as a result of attitudinal barriers. In September 2017, I underwent four intense recruitment stages for a job that required a person with a certificate in any field. Out of over 200 applicants, only 50 of us qualified and were invited for a contract signing open day but I was then notified that the systems I would be expected to work with were not accessible for visually impaired persons. My Law degree, experience or determination did not matter. My dignity was stripped off, but with time, I have learnt to use this experience in changing the perception of disability through proposing practical solutions to the challenges we face.

My experience has made me resilient, persistent and committed to the cause, notwithstanding the stumbling blocks I have faced; to walk the talk and lead by example. The case I recently won against the company which denied me the opportunity is a clear demonstration that there are remedies that can be pursued.

Do you think people with disabilities in Africa have the same opportunities as those without disabilities?

Yes! I believe we have. The challenge is that we are often denied most opportunities, due to ignorance of our abilities, negative stereotypes, and discrimination.

Zambia has a new ministry of technology, what do you think or what processes would you advise the government to prioritise to ensure digital inclusion for people living with different disabilities?

Zambia should ensure that persons with disabilities are involved in all decisions that are made concerning their interests. The Ministry of Technology should put in place normative frameworks to ensure that all players enhance the accessibility of their products, services and platforms. One of the ways of achieving this is by developing digital accessibility standards, as has been demonstrated by other countries such as Kenya.

How can the government best reach out to people with disabilities to ensure they are empowered and have equal opportunities?

Of course, the differently-abled have not had as many opportunities as others in all sectors. However, it is inspiring to learn about a few others that are breaking the glass ceiling by stepping on equal footing with the well abled. They have seized opportunities and demonstrated beyond reasonable doubt that once opportunities are created, anyone is well able to rise above them.

According to an online article, some of the ICT tools that can enhance the capacities of persons with disabilities include among others:  Speech recognition, talking word processors, big pointer utilities, and screen magnifiers, screen readers, electronic Braille, symbol‐generating software, concept keyboards and talking books.

As Zambians await the 2022 budget presentation this Friday 29th October 2021, it is my hope that sufficient resources will be channelled to ICTs that will help control the online exclusion that persons with disabilities have been experiencing which has stalled them from enjoying certain benefits.

Investing in persons with disabilities makes them enjoy their Human Rights as well as adds to the country in so many ways, one example is Themba Muimo, a Zambian youth born with Cerebral Palsy. This condition affects a person’s ability to move and people who suffer from such a condition have difficulty sitting up alone, intellectual disabilities, delays in speech development and difficulty speaking, drooling and problems in swallowing.

Themba, despite his condition, has faced the world with confidence and has lived a victorious life thus far. In addition to his local achievements within Zambia, he represented Zambia in the Mandela Washington Fellowship program for young African leaders. His other achievements include the attendance of the International Symposium on Cerebral Palsy in the Netherlands and Belgium in November 2009 respectively.

Since 2018 Themba has been working with two health professionals from the University of New York as a research assistant for a project that focuses on the effects of violence among youths with disabilities in mainstream schools and he has also worked with Multichoice Zambia Limited as a sales agent since 2019.

Themba has been able to achieve all this through the efforts his mother Esther Mundia made to invest in him. Esther is the founder of MYCEPA which means MunuKa Yumbwa Cerebral Palsy Association.  “MUNU KA YUMBWS” loosely translates to “Every Person has Value” or crudely, “A Human Cannot Be Discarded”. Her vision was to build and equip a Rehabilitation Centre of excellence for children with cerebral palsy and those with disabilities, to help those affected reach their full potential.

The facility offers physiotherapy, occupational therapy, exercises, counselling, awareness sessions, identification of those affected.  Sourcing assistive equipment, distributing donated items, referring those affected to specialized hospitals for further treatment and management and it’s a meeting place for a parent to parent interactions where they open up to each other about the challenges and successes they are facing with their children whom they are caring for and offer advice to each other.

Sadly, not so many persons with disabilities are privileged with such facilities and if an individual like Esther was able to come up with such a facility as MYCEPA that among other things sources for assistive equipment, then the government can do much more and reach many more people with disabilities to actualise an inclusive society.

Another achiever is Stephen Hawking (8 January 1942 – 14 March 2018) one of the most famous scientists the world has ever seen. Prof. Hawking was confined to a special wheelchair mounted with a computer that used to speak for him. He had lost speech due to ALS. Prof Hawking was an eminent theoretical physicist who made significant breakthroughs about the functioning of the universe. The Discovery of Hawking radiation is among several of his important scientific contributions.

No person therefore should be excluded based on disability as every person has worth and should be treated with utmost dignity. People with disabilities have not only been denied opportunities which they deserve and are capable of accomplishing if their needs are met but most of them have been hidden from the world by being kept in homes to avoid stigma from society.

PrevPreviousGlobal Encryption Day: A Call for Governments to Build a More Secure Internet
NextGender Digital Divide – A Gap that Should be BridgedNext