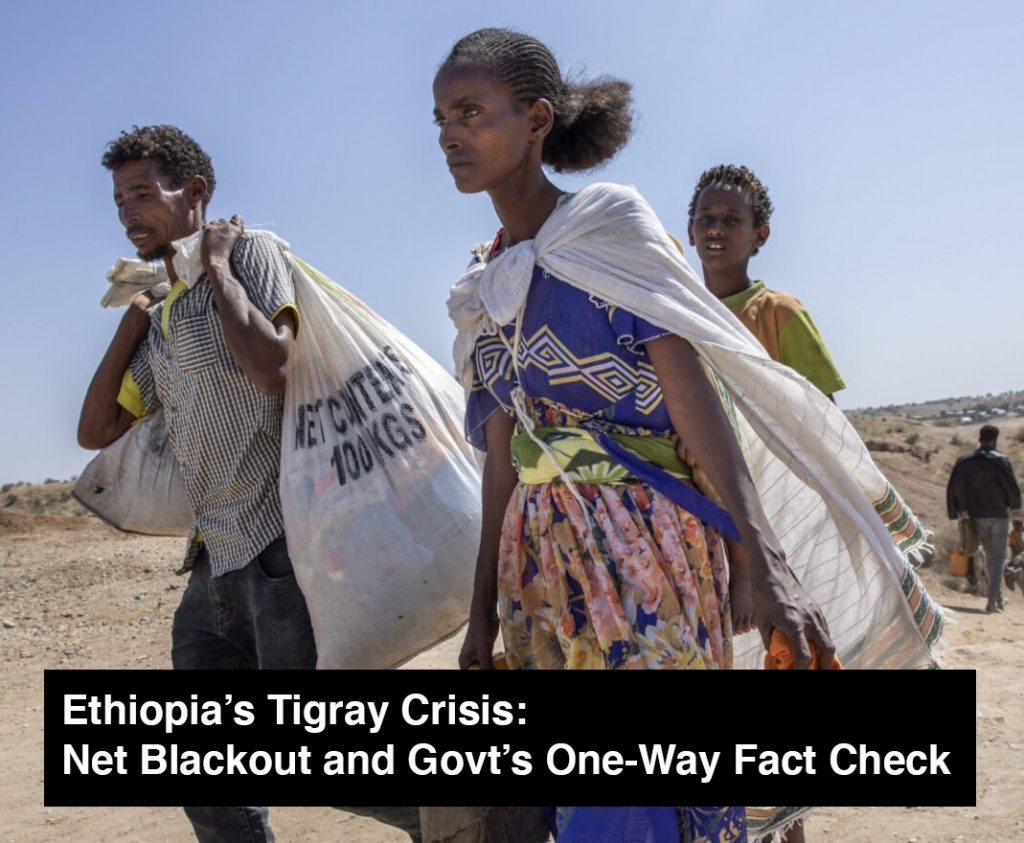 Ethiopia has had a challenging 2020 relative to the internet. There has been a triple outage – two restricted to particular zones and one nationwide. The first outage in western Oromia lasted three months in an area government was combating rebels.

The second and more impacting being the nationwide blackout imposed in June, through the better part of July followed the killing of a famed Oromo artiste, Hachaalu Hundessa, in the capital Addis Ababa. That blackout lasted over three weeks according to Net Blocks.

The more recent restricted outage is in the northern Tigray region where the government says it is carrying out a “rule of law operation” against the recalcitrant regional government led by the Tigray Peoples Liberation Front, TPLF.

Immediately after Prime Minister Abiy Ahmed “declared war” on the TPLF in early November 2020, internet connectivity was cut across Tigray as federal forces engaged the regional forces in hostilities that have triggered a humanitarian crisis along the border with Sudan.

Days after the operation began in western Tigray, the government announced official social media channels (Facebook / Twitter) – to debunk fake news. Relaying official account of the operation and debunking misinformation was the main task of the State of Emergency Fact-Checking handles.

From new reports about the bombing of a dam, enlisting of South Sudanese soldiers, and talk of regional even continental mediation; the government debunked all of the above whiles confirming other separate incidents reported in the press and posted on social media.

Incessant as the calls for de-escalation and restoration of especially communication services have been, the calls have all been rebuffed by Addis Ababa. The United Nations, African Union, human, media, and digital rights groups, have all made the unheeded call.

Most people tweeting about the crisis are believed to be Ethiopians from the diaspora and or political and security watchers who receive their information from other sources – be it diplomatic or by other means.

The regional authorities despite the blackout continue to grant interviews especially to the major news agencies – Reuters, AFP whiles other journalists in the region also relay news via Twitter especially.

Analysts on Ethiopia’s ‘assault’ on connectivity

“…in blatant disregard of basic human entitlements, the government of Ethiopia never missed an opportunity to violate the rights of citizens. At the slightest provocation, the government appears to always have as its first option, internet shutdowns and communication restriction.”

“Internet shutdowns are never a good option in times of crisis or national emergencies. A society that does not have access to information is a society that is walking in a fathomless abyss,” he added.

For other analysts, it was intriguing that a government creates the conditions for fake news to be peddled yet positions itself to be a “unilateral” source of credible information.

Why the outrage and calls for lifting measure

The Ethiopian government did not give any reasons – it hardly ever gives reasons for such security-related shutdowns – but experts have said the move was to ensure that government controls the war narrative plus to disrupt communication lines of “opponents.”

Despite not being opponents, the media became one of the most adversely impacted by the communications blackout. People outside of the region could also not connect with family and friends trapped in the region.

In a recent Reuters report, the script read in part: “Claims from all sides are difficult to verify since phone and internet links to the region have been down…” Several journalists have had to depend on diplomatic sources and other means to report incidents.

Most analysts have stressed the impact of unverifiable information. In which instance people peddle fake news along with its attendant dangers. Local and international watchers have tasked the government to lift the outage.

“Cutting off communication has severely hampered the ability to monitor the situation on the ground, particularly the impact of the clashes in the local population,” UN human rights head Michelle Bachelet said in a November 6 statement.

Bachelet asked Addis Ababa to “re-establish all basic services, including Internet and telephone connections.” Adding that “the right of all people to be informed and to access information is particularly vital in a crisis situation”.

But authorities in Ethiopia are not alone in seeking to unilaterally combat fake news, over in Nigeria, the Army has recently appropriated unto itself busting fake news on social media.

In the aftermath of the deadly toll booth shooting in Lagos amid the #EndSars protests, the Army stamped “fake news” labels on social media posts alleging their complicity in the incident.

Restricting the internet as done by Addis Ababa was to achieve an end – be it security or information control. Going a step further to fact check reports underlines the importance of combating unverified/fake news.

The writer, Abdul Rahman Shaban Alfa, is a 2020 Paradigm Initiative Digital Rights and Inclusion fellow. He is a digital journalist who writes on major digital rights trends across Africa.