Commemoration of International Day to End Impunity for Crimes against Journalists 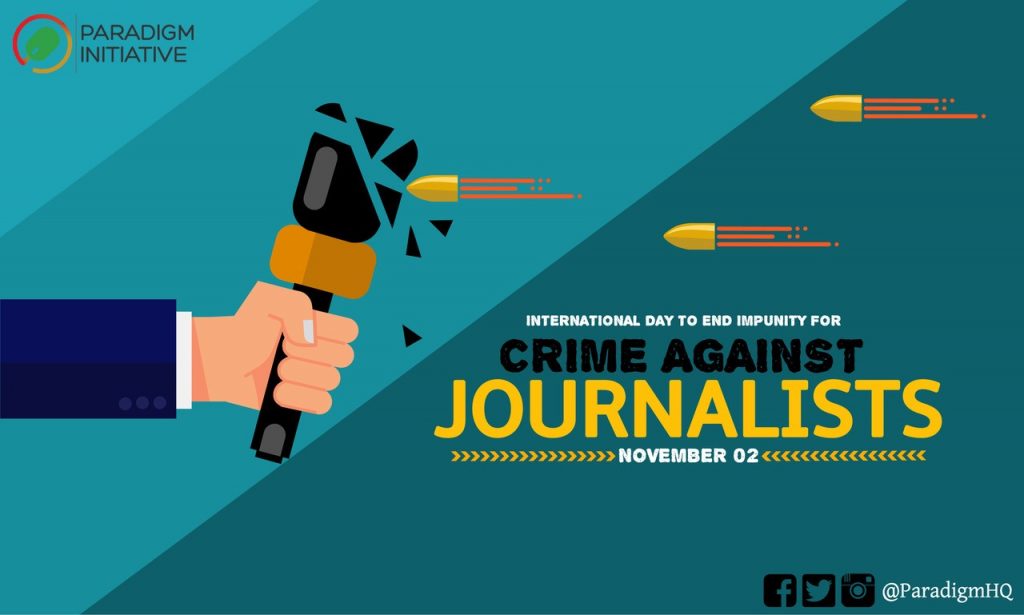 Commemoration of International Day to End Impunity for Crimes against Journalists

Paradigm Initiative (PIN) joins the world to commemorate International Day to End Impunity for Crimes against Journalists. According to the UNESCO observatory of killed journalists in Africa, 145 journalists have been killed between 2010 and October 2020. Many more have been killed across the world. We condemn the inhuman and degrading treatment that journalists and media practitioners face globally and call for the respect for human dignity of all media practitioners.

In the words of UN Secretary-General, António Guterres, when journalists are targeted, societies as a whole pay a price. Without the ability to protect journalists, our ability to remain informed and contribute to decision-making is severely hampered. Without journalists able to do their jobs in safety, we face the prospect of a world of confusion and disinformation. In a global analysis in Safety of Journalists, on average, every five days a journalist is killed for bringing information to the public. Attacks on media professionals are often perpetrated in non-conflict situations by organised crime groups, militia, security personnel, and even local police, making local journalists among the most vulnerable. These attacks include murder, abductions, harassment, intimidation, illegal arrest, and arbitrary detention.

It is most urgent that governments across the world take stock of their human rights record in relation to journalists, said Paradigm Initiative’s Community Manager, Thobekile Matimbe. Without journalists, there is no information for the world to get protection for human rights. Not only for the citizenry, governments need critical information on the lived experiences globally. It is time that journalists perform their mandate without fear of reprisals. Protection of journalists as they perform their duties offline and online is important to keep the truth alive.

We remind African States to comply with their obligations under the International Covenant on Civil and Political Rights, the African Charter on Human and Peoples’ Rights and governing national constitutions in as far as they guarantee media freedoms.

We urge African States to follow the guidance in Principle 20 of the of the  Declaration on Freedom of Expression and Access to Information in Africa, to guarantee the safety of journalists and media practitioners and to take effective legal and other measures to investigate, prosecute and punish perpetrators of attacks against journalists and other media practitioners, and ensure that victims have access to effective remedies.

It is critical for governments to ensure that perpetrators of impunity against journalists are made to account.  We call for a safe and favorable environment enabling journalists to perform their mandate without fear or reprisals.