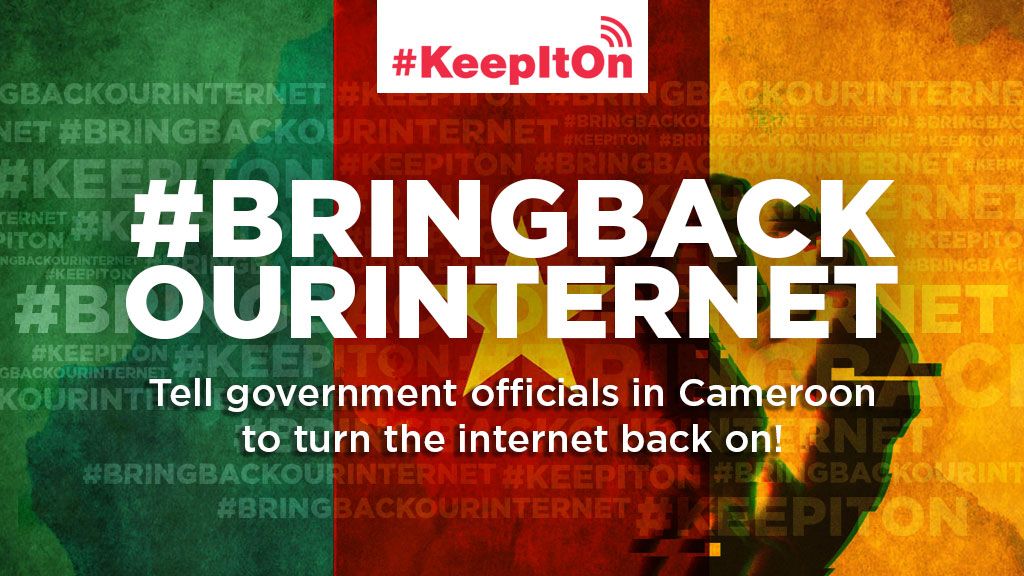 We are calling on the Government of Cameroon to stop its interference with Internet activities in parts of the country forthwith.

We have it on good authority that Internet connections have been blacked out in some areas of the country for up to 9 days as at press time. Internet users in Cameroon are pointing fingers at the government after several reports of Internet blackouts on Tuesday, 17th of January, 2017 which lasted for several hours and for some, until the early hours of Wednesday in many parts of the country – especially the North West and the South West regions and several evidences have surfaced to back this allegation up; For example, Government fibre optic provider CAMTEL in a letter confirmed to minister of Posts and telecommunications that their directive to shut down the internet had been carried out. Reiterated that an investigation will be carried out and any provider found not respecting directives will be published.

Users began experiencing what they consider to be shutdowns after Cameroon’s Minister of Communication, Issa Tchiroma Bakary announced that the government has declared the Southern Cameroons National Council (SCNC) and the Anglophone Consortium illegal. These groups had been at the forefront of strike actions that began with the Lawyers’ and Teacher’s trade unions a few weeks ago ending in a stalemate in dialogues between government officials and protest stakeholders.

In a decree signed by the Minister of Territorial Administration and Decentralization, Rene Emmanuel Sadi, the government says the Southern Cameroons National Council (SCNC) and Cameroon Anglophone Civil Society Consortium (CACSC) are acting in breach of the Constitution of Cameroon, jeopardizing the territorial integrity, national security and integration of the country adding that it will carry out legal proceedings against defaulters.  Supporters of the movements have been told to desist from activities linked to those of the groups across the national territory.

Shortly after the release of the decree outlawing the SCNC and the Cameroon Anglophone Civil Society Consortium; security agents arrested two of the Consortium leaders. Dr Agbor Nkongho and Dr Fontem Neba were taken to the police brigade in Buea. Reports from sources in Cameroon say they have since been transferred to special police detention in the capital city, Yaounde. According to reports, arrested activists will appear at a military court and face the death penalty in comformity with 2014 terrorism law

The government’s decision to outlaw the Consortium group and arrests its leaders has  shocked and angered its supporters who have taken to social media to demand their release. The decision comes a day after the head of an Inter-ministerial Adhoc Commission charged with seeking solutions to the grievances and demands of the Trade Unions, Prof Paul Ghogomu announced that he ended his dialogue and solutions mission with a report compiled and forwarded to the Prime Minister, Philemon Yang.

The government’s move may be seen as a result of fruitless attempts to reach a concrete agreement with striking teachers and lawyers of the North West and South West regions who have grounded schools and court sessions for close to three months.

Last week, faced with complaints of blocked lines, inability to make and receive calls and suspicion from customers that telecommunications providers had a hand in trying to restrict communications and the internet, MTN Cameroon published a statement denying the allegations.  In recent times, government officials have castigated social media users in Cameroon and suggested a need to create and enforce laws regulating the internet and social media use.

However, it is no news that Cameroon has some of the most repressive laws on press and human rights freedoms. Law N° 2010/012 of December 21 2010, on Cybersecurity and Cybercrime, governs the security framework of electronic communication networks and information systems. It also defines and punishes offences related to the use of information and communication technologies in Cameroon. On November 10, 2016, the Speaker of the National Assembly, in a speech that referred to social media as a “new form of terrorism”, spoke against freedom of expression on the Internet and social media, possibly hinting at a planned government policy to curb freedom of expression online.

On the 1st of July, 2016, the 32nd regular session of Human Rights Council adopted the Resolution A/HRC/32/L.20 on Digital Rights. The resolution titled “the promotion, protection and enjoyment of human rights on the Internet” made an enduring case for issues of Internet rights and why their violations have to stop.

Also, at the just concluded EU-AU Human Rights Dialogue held in Brussels, Belgium on the 10th of January, 2017, the joint communiqué released emphasized the protection of freedom of expression and right of access to information in the digital age. The African Court of Human and Peoples’ Rights’ Resolution on the Right to Freedom of Information and Expression on the Internet in Africa was also welcomed and emphasized on the need to have rights accruable offline to be transmuted online.

These among many other globally acknowledged resolutions by stakeholders have given expediency to the need to step up guard against abuse of freedom of expression online and arbitrary Internet shutdowns especially in countries with peculiar governments in Africa. These resolutions more than ever, mirrors the minds of several millions on the use of the Internet on restating to their governments that governance is possible, even more optimized, without interference or shutting down of the Internet.

We call on the Government of Cameroon to desist from clamping down on human rights online and restore all Internet activities in areas of the country that have experienced shutdowns. We hope the government heeds the call and project itself in the positive light for the global community and seize this opportunity to brand itself as a right-respecting institution.