L.I.F.E.
#AjegunleLIFE and #AbaLIFE 2015C training program continued with the Entrepreneurship, Financial readiness and Life-skills training. The training came to an end on Friday 18th September, 2015. 106 (40 #AjegunleLIFE, 66 #AbaLIFE) students were issued letters of completion on graduating from the program. Aside from the Microsoft Productivity tools, Entrepreneurship, Financial Readiness and Life-Skills trainings, the L.I.F.E. 2015C students also received trainings on #DigitalJobs and Social Media.

Ajegunle Innovation Centre (A.J.I.C.) hosted the Quarterly Workshop for #AjegunleLIFE Alumni and students. The speaker at the workshop was Mr. Bukki Dosumu who spoke about “Living Your Purpose”. The annual #AjegunleLIFE Townhall meeting held on  Wednesday 23rd September, 2015. The meeting was attended by Parents, stakeholders, volunteers, partners, community leaders and #AjegunleLIFE alumni and students. AbaLIFE also hosted the quarterly Alumni meeting for the 2015C set.
ICT POLICY
PIN joined international human rights and transparency groups all around the world to write in opposition to Twitter’s recent decision to revoke the ability of the tool Politwoops and similar tools to utilize Twitter’s Application Programming Interface, or API. We believe Twitter’s decision holds grave consequences for free expression and transparency around the world. To justify its decision, Twitter explained that, “No one user is more deserving of that ability [to delete a tweet] than another. Indeed, deleting a tweet is an expression of one’s voice.”  Our position is that in the process of building the culture of accountability in Public service in Nigeria, public officials should never be given that privilege. Basically we agree that the rule mustn’t be the same for private citizens and public officials who offered self for election/appointments and live on tax payer’s money.

‘Boye Adegoke, Program Manager ICT Policy officer participated in a convening of civil society organizations and other agencies working on Internet freedom issues. The meeting  held on Tuesday September 22, 2015 from 10.00am to 3.00pm at the Ford Foundation office in Banana Island,  Lagos,  with the objective of gaining perspectives on emerging trends, opportunities and challenges regarding internet public policies in Nigeria.

PIN’s weekly #PINternetFreedom chat in the month of October will focus on ‘Women’s Rights Online’. Please join the conversation every (2pm GMT+1) every Thursday. #WomensRightsOnline is the official hashtag.

DIGITAL JOBS
In the month of September, the Digital Jobs team  delivered Upwork training to 33 students who had signed up to be trained by PIN via www.dorojobs.com, as well as 26 students from our Ajegungle LIFE 2015C class at PIN HQ. Gbenga Adebiyi, an online worker who was trained by PIN in the month of July facilitated the trainings. The exposure to upwork was also extended to #AbaLIFE students on the 28th of September and was facilitated by Ikechukwu Nwakpu who also passed through Digital Jobs trainings at PIN.

The Digital Jobs team  also introduced specialised skill training classes. At the first edition, ‘Gbenga Sesan, PIN’s Executive Director, trained a class of 17 participants at the Digital Security Master Class. The one-day training took place on the 15th of September, 2015 at PIN HQ.  The#DigitalJobs September  give-away has been extended  to October.
TENT
TENT@OAU students will embark on a 6-month internship program as part of the compulsory Students Industrial Work Experience Scheme (SIWES) in  the fourth year of learning. This is to commence November 2015. 99 students  signed up for TENT@School in the first year, but only 13 have qualified for this level, where PIN facilitates the placements of students in reputable technology companies for further training.

Dare to be BIG  is going to Kano! The plan is to bring early expose to ICTs to students from 30 secondary schools in Kano State from 20th -22nd October 2015. In addition to the training, the schools will also participate in a quiz competition. . The top 3 schools will be presented with trophies,  while the students who represent the schools in the quiz competition will be presented with tools that will enhance further knowledge of ICTs. 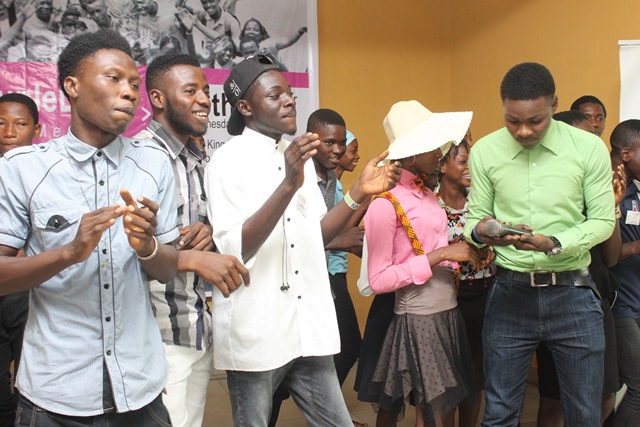