Stakeholders Hold Roundtable on Digital Rights and Engagement in Lagos 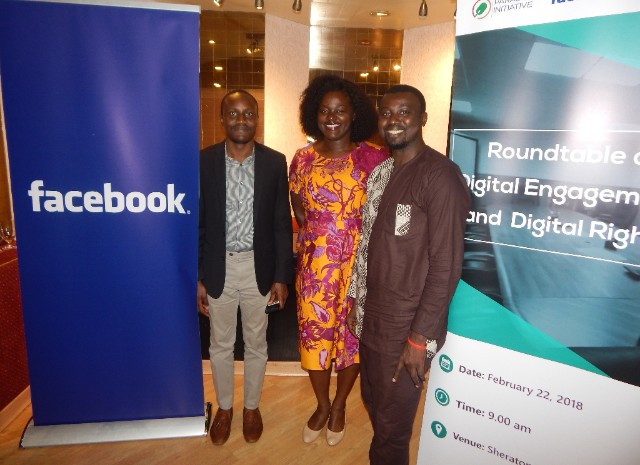 Effective digital engagement by government agencies remains a big priority for the Federal Government because of its immense potential, this was the position of Tolu Ogunlesi, the Head of Presidency Office of Digital Engagement (PODE). Ogunlesi was speaking at a stakeholder roundtable on digital rights and digital engagement organized by Paradigm Initiative, Facebook, and PODE.

The roundtable, which held on February 22, in Lagos, brought together stakeholders from government agencies, the private sector, and the civil society.  It provided an engaging atmosphere for a lively debate on issues affecting internet freedom and digital engagement by government agencies in Nigeria. Issues discussed at the roundtable include data privacy and protection, law enforcement, libel, fake news, and digital engagement by the government. The roundtable followed the first edition held in Abuja last year.

Speaking at the roundtable, the Executive Director of Paradigm Initiative, ‘Gbenga Sesan emphasized the need for continuous conversation between stakeholders in the private sector, civil society and the government on digital rights issues in Nigeria. He said, “Digital right issues are far too important to our democracy and it is crucial that we engage in conversation with security agencies and public servants on how we can ensure freedom of people online while keeping the nation and citizens safe.”

In her remarks, Public Policy Manager, Africa of Facebook,  Akua Gyeke said, “Facebook is an important platform for political conversation in Nigeria, and we are happy to be a part of this. Facebook is dedicated to keeping people safe online, foster civility and responsible behavior and promoting free expression and sharing.”

Tolu Ogunlesi, who led the conversation on a proposed Digital Engagement Policy for Federal Government, said that his office was working hard on creating digital engagement standards that would guide all government offices in their use of digital tools to ensure effective communication with the public.

“There is currently no social media policy for the Federal Govt. This is understandable as social media use is relatively new in government circle. But this situation has led to inconsistency in the way government offices use digital media. We are currently working on creating a digital engagement policy for the federal government. It will provide guidelines on platforms to use, accounts administration, logo and naming standard, editorial policies, archival system, content process, and management, among other things”

Participants at the roundtable include Anselm Ozioko of the Economic and Financial Crimes Commission representing the Acting Chairman of the Commission and the Acting Director of Defence Information Brigadier General John Agim, who provided perspectives from the national security and law enforcement side. Other participants are Chioma Okee-Aguguo representing the CEO of  National Information Technology Development Agency, Olufemi Fadare of the National Identity Management Commission, Olusola Teniola, President, Association Of Telecommunication Companies Of Nigeria (ATCON), Edet Ojo, Executive Director at Media Rights Agenda.