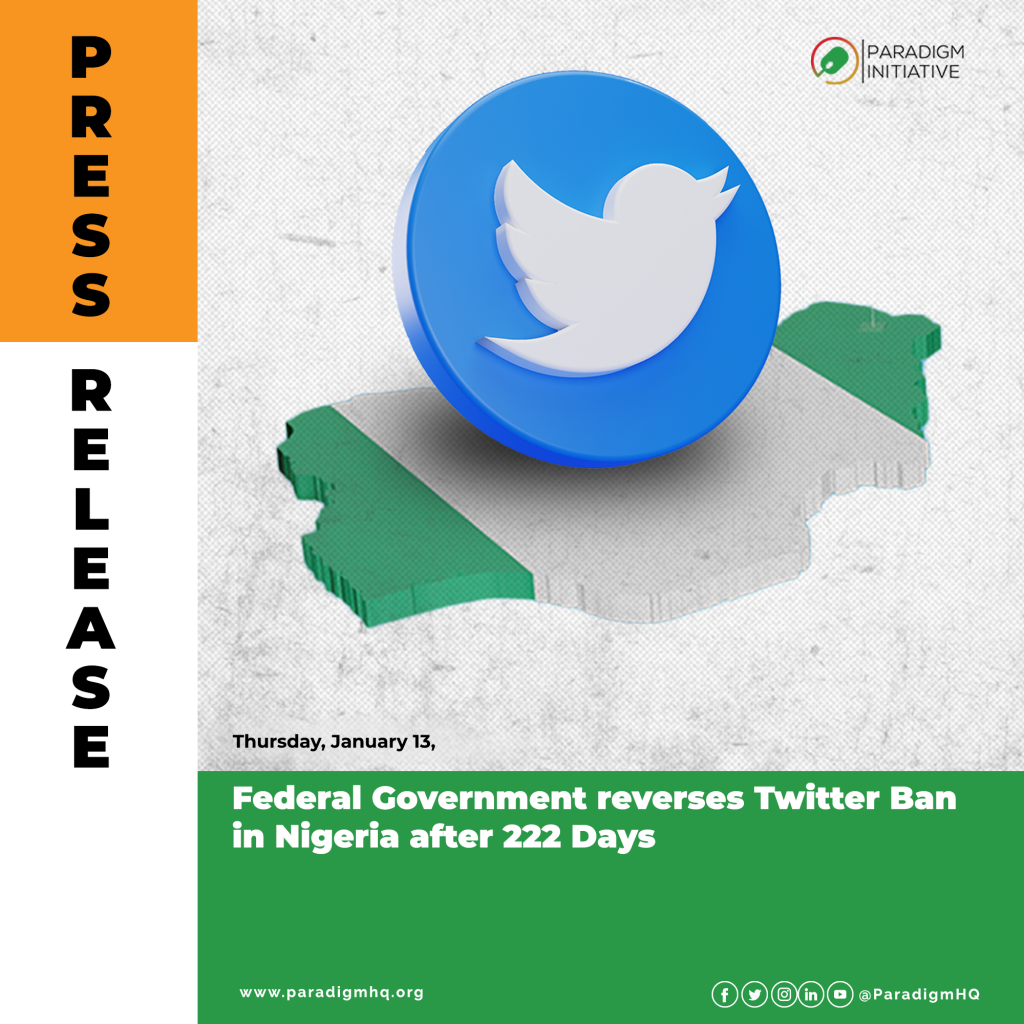 The Federal Government of Nigeria announced the reversing of the ban on the microblogging platform Twitter in the country exactly after 222 days of total disengagement with the Nigerian public following countless requests and court cases. The lifting of the Twitter ban comes after a statement by the Director-General of the National Information Technology Development Agency (NITDA), Kashifu Inuwa Abdullahi, following the suspension approval by President Muhammadu Buhari.

Paradigm Initiative is happy that the ban has been lifted and access to the microblogging platform has been restored. Nonetheless, we insist the arbitrary suspension was a gross violation of the people’s fundamental rights to freedom of expression and association enshrined in the Nigerian constitution. These rights are also protected by international instruments and highlighted in the Declaration of Principles on Freedom of Expression and Access to Information in Africa, adopted by the African Commission in November 2019, at its 65th Ordinary Session, which provides in Principle 38 (1) and (2) that “States shall not interfere with the right of individuals to seek, receive and impart information through any means of communication and digital technologies, through measures such as the removal, blocking or filtering of content, unless such interference is justifiable and compatible with international human rights law and standards” and that “States shall not engage in or condone any disruption of access to the internet and other digital technologies for segments of the public or an entire population.”

Although we consider the reverse of the ban long overdue, its effects were detrimental to the nation and cannot be overlooked. As such, we demand an explanation and clarification of the action in the first place. It remains pertinent that the courts of law interpret the law on this matter to ensure that actions such as this do not become commonplace in the country.  Paradigm Initiative in association with other CSOs will continue to follow up and monitor its cases filed against the Federal Government, and some Telecommunication stakeholders  that have been adjourned.

PIN vs AGF, NBC, FGN. Filed at the Federal High Court in Abuja. We sought a declaration that the Twitter ban is a violation of freedom of expression, an order that the ban be lifted and an injunction from arresting, prosecuting or taking any action on those using Twitter. the matter was adjourned to 17th January, 2022

EiE, PIN & MRA vs MTN, Airtel, Globacom & 9Mobile. Filed at the Federal High Court in Abuja on August 3, 2021. We sought a declaration that the respondents blockage of Twitter access was unlawful, unconstitutional and against the rights to freedom of expression and an injunction restraining all respondents from blocking or interfering with Twitter and any other social media platform. No date has been fixed for the hearing of the suit.