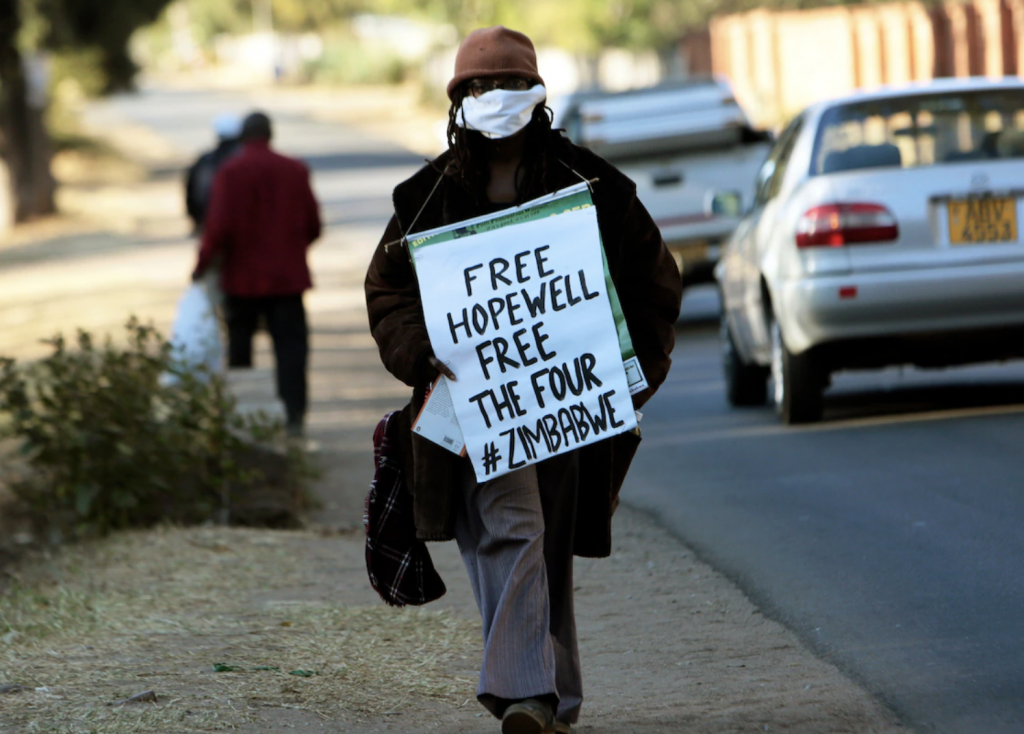 Lusaka, Zambia – [July 21, 2020] – Paradigm Initiative, is deeply concerned by the arrest of Zimbabwean journalist Hopewell Chin’ono on the 20th of July 2020 from his home in Harare.  The arrest which he live-streamed is allegedly linked to three tweets exposing acts of corruption within the government. The police also arrested an opposition activist Jacob Ngarivhume on the same day.

Amidst social media alerts suggesting that Hopewell had been abducted by suspected State security agents, the Zimbabwe Republic Police then issued a statement confirming the arrest of the two in connection with the charge of incitement to participate in public violence as provided for in section 187(1)(a) of the Criminal Law (Codification and Reform) Act, Chapter 9:23. The 2 are yet to appear in court to be formally charged.

Today, the State security agents in Zimbabwe are reported to have proceeded to Hopewell’s home to search for any gadgets used to tweet the so-called information that is likely to incite members of the public to commit public violence. Hopewells social media accounts have since been taken down. The arrest of Hopewell and Jacob comes at a time where the Zimbabwe Human Rights NGO Forum a coalition of 20 organisations including MISA-Zimbabwe has documented 24 attacks on media practitioners as presented in their Zimbabwe COVID-19 Lockdown Monitoring Report 19th to 20 July 2020 – Days 110 to 111 which captures the human rights violations from the 30th of March 2020 when Zimbabwe went on lockdown.

Paradigm Initiative’s Program Officer for Southern Africa, Bulanda Nkhowani, describes the development as an outlandish action indicating a failure of the government of Zimbabwe to protect journalists in the conduct of their work as mandated by Principle 20(1) and (2) of the Declaration Of Principles On Freedom Of Expression And Access To Information In Africa (the Declaration) adopted by the African Commission On Human And Peoples’ Rights at its 65th Ordinary Session held From 21 October to 10 November 2019 In Banjul, The Gambia.

The principle states clearly that States shall guarantee the safety of journalists and other media practitioners and take measures to prevent attacks on journalists and other media practitioners, including murder, extra-judicial killing, torture and other forms of ill-treatment, arbitrary arrest and detention, enforced disappearance, kidnapping, intimidation, threats and unlawful surveillance undertaken by State and non-State actors. “The Declaration echoes the spirit of Article 9 of the African Charter on Human and Peoples’ Rights that every individual shall have the right to express and disseminate his opinions within the law.” Bulanda concluded

We call the government of Zimbabwe to ensure that media freedoms are respected without the harassment of journalists in the execution of their mandate to ensure access to information which is critical for holding governments accountable to their citizenry.

We further urge the government of Zimbabwe to desist from arbitrary arrests of journalists, to desist from the unjustified invasion of their privacy and to follow due process to ensure that Hopewell and Jacob get access to justice says Paradigm Initiative’s Community Manager, Thobekile Masimbe