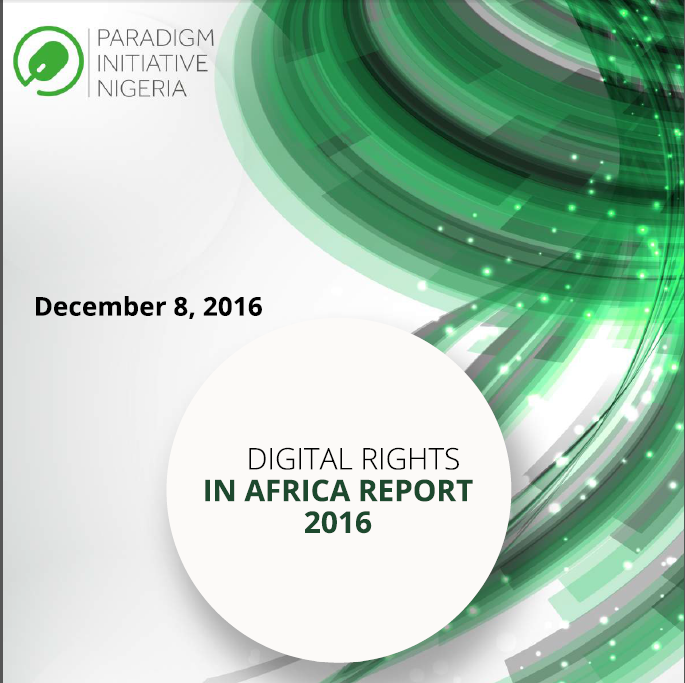 Paradigm Initiative Nigeria (PIN) has just released the first edition of its Digital Rights in Africa report, titled “Choking The Pipe: How Governments Hurt Internet Freedom On A Continent That Needs More Access”, on the sidelines of the ongoing Internet Governance Forum in Guadalajara, Mexico. This builds on PIN’s earlier work that profiled, each year over the last 2 years, the status of digital rights in Nigeria, and features information about the status of digital rights in 30 African countries, including 5 countries in Central Africa (Cameroon, Chad, Democratic Republic of the Congo, Republic of the Congo and Gabon); 7 East African countries (Burundi, Ethiopia, Kenya, Rwanda, South Sudan, Tanzania and Uganda); 4 countries in North Africa (Algeria, Egypt, Morocco and Tunisia); 9 West African countries (Benin, Cote d’Ivoire, Gambia, Ghana, Mali, Mauritania, Niger, Nigeria and Sierra Leone) and 5 countries in Southern Africa (Angola, Botswana, Mozambique, Zambia and Zimbabwe).

Tomiwa Ilori, PIN’s Program Assistant (ICT Policy) and a Digital Rights in Africa report team member, stated that, “The year 2016 has shaped up to be the year of Internet shutdowns in Africa, with numerous documented cases of shutdowns recorded across the continent. This is in addition to an increasing number of legislations and policies that violate digital rights; and arrests of numerous bloggers, journalists and citizens who exercised their right to freedom of opinion and expression online.” He added that “a common trend for Internet shutdowns across the continent has been government orders to private telecommunications and Internet companies to cut off citizens from the Internet, and this shows that private businesses – including global businesses working in countries where they respect citizen rights – still act, in many cases, at the behest of governments across Africa.”

According to Babatunde Okunoye, another member of the PIN Digital Rights in Africa report team, “2016, however, was not just about African governments’ actions to constrain Internet freedom. It was also very much about how citizens fought back and stood up to defend their rights. In response to the spate of Internet surveillance and shutdowns across the continent, citizens across African countries increasingly took up the use of circumvention tools and led efforts that challenged the action of their governments.” He further stated that, “Internet shutdowns and violations by the governments across Africa turned out to be the source of enduring power for African citizens to mobilize in order to defend their rights. The evidence, from observing the incidents of Internet shutdowns and violations across the continent, suggests that governments got away with encroaching on rights only to the extent citizens allowed them to do so.”

Oluwaseun Ajayi, a Google Policy Fellow resident at PIN and member of the Digital Rights in Africa report team, stated that: “This report, which focuses on the year 2016, recognizes the importance of citizen vigilance and lawful action against the constraining of Internet freedom across the continent and gives a brief account of the legislative and policy environment around Internet freedom, highlights incidents around breached Internet Freedom, and provides information about the telecommunications space in Africa.” She continued, “The methodology employed in preparing this report involved desk research and a survey conducted among experts resident in the featured African countries. We hope that the report will spur action among an increasing number of active citizens, noting that we are responsible for upholding and defending human rights and dignity in cyberspace.”

This report, according to Paradigm Initiative Nigeria, is part of the organisation’s work towards the creation of awareness about, and advocacy for, digital rights in Africa. “As we create awareness on the threat to Internet freedom and provide information on what can be done to improve digital rights across African countries, PIN leads advocacy efforts for digital rights of citizens and other stakeholders; complete digital rights training for media, advocates and civil society organisations; host the annual Internet Freedom Forum where various stakeholders discuss prevailing issues; and produce this annual report that highlights incidents and discusses digital rights challenges and opportunities across the continent,” said ‘Gbenga Sesan, PIN Executive Director.

‘Gbenga believes that “active citizens and civil society constrain the tendency of those who abuse positions of authority to perpetuate digital rights violations. Or, at least, the problem gets attention and forces either denial or in some cases, reversal of violations.” He continued: “With at least 10 countries imposing Internet or Internet application shutdowns, unfortunately, Africa was the hotbed for violations to digital rights. Africa is already behind on many development indices but the Internet presents perhaps a chance to bridge many of those gaps through the access it grants to life-changing information, communications, education, opportunities and its role in the development of the political space. Those who constrain Internet freedoms should be seen as adversaries of development – something Africa needs in a hurry.”

If you would like more information about this topic or additional details about PIN’s Digital Rights work, please send an email to info@pinigeria.org or contact us using any of the under-listed details.