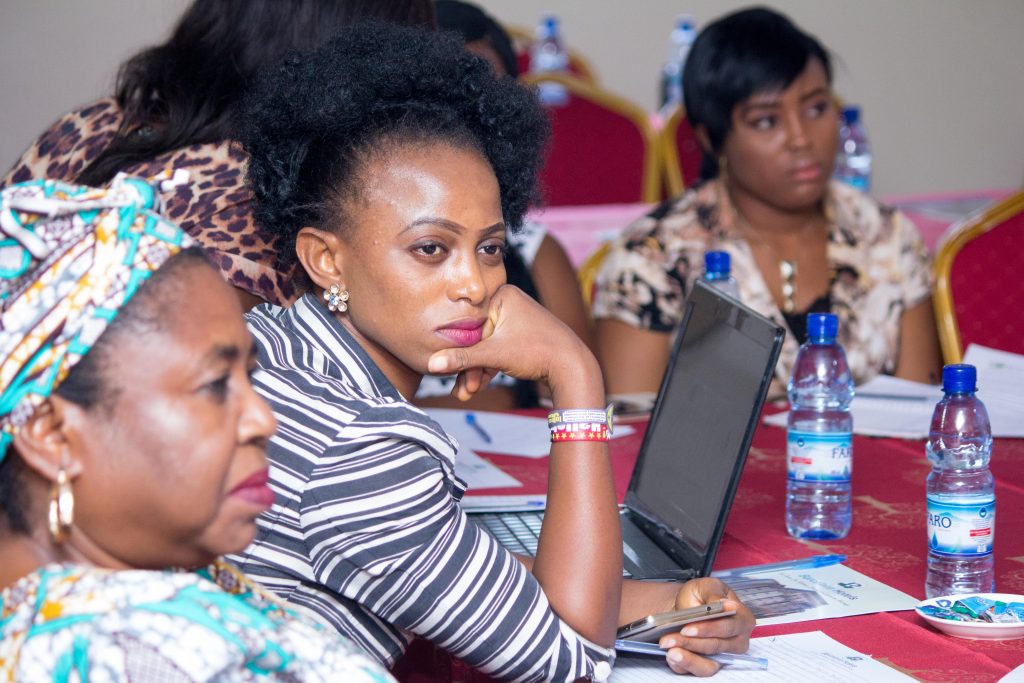 On October 17 2017, the World Wide Web Foundation and Paradigm Initiative hosted a Workshop on Closing the Digital Gender Gap and Mainstreaming ICTs into Women’s Rights Policy and Program Frameworks in Nigeria.  The Workshop, which held in Abuja, provided a platform for discussing issues of the gender divide in the ICT sector.

The Paradigm Initiative team led by Tope Ogundipe made presentations on the following topics:

 Digital Equality in the Context of Sustainable Development Goals

The Nigeria Gender Audit Scorecard was also shared with participants.

Dr. Ernest Ndukwe, former NCC Chairman/CEO and National Coordinator, A4AI Coalition Nigeria; made a presentation on ‘Internet Access as Driver of Socio-Economic Development for Women.’ Closing his presentation with a focus on the R.E.A.C.T (Rights, Education, Access, Content and Targets) framework, he called the Ministry of Communications (in absentia) to review and update the National Broadband Plan 2013 – 2018 (including timelines and budgets) for digital literacy initiatives and public access targeted at populations that are unconnected, especially women and girls in urban-poor/rural settlements. He recommended that an apolitical committee be set up and saddled with these responsibilities. The emphasis on such committee being apolitical is to avoid the truncation that usually occurs with the transition in governments, especially from one political party to another.

He also spoke on the need to replicate efforts of the broadband plan to deliver fast, reliable and affordable internet access by federating units of Nigeria, adding that the States and Local Government must commit to take similar measures alongside the Federal Government for meaningful results.

The Senior Special Assistant to the President on ICTs; Lanre Osibona, spoke on the role of ICTs in education, health, financial inclusion and safety for women when speaking out on sensitive issues that affect their welfare. He emphasized that perhaps the biggest of the barriers many women and girls face is illiteracy, and that inability to access or use technology further entrenches the limitation.

He mentioned the role of web-enabled technologies as a critical tool to improve literacy for women and girls. He highlighted some efforts of the government in this regard, especially an effort to address the gap in STEM skills in primary and secondary schools through the Junior N-Power Program.

He also touched on the role of government stakeholders in working together to ensure the right mix of regulatory initiatives and intervention not only needed to encourage greater competition among market players but also to encourage deeper penetration and use of ICT services (ensuring that regulation around breaking monopoly doesn’t stifle innovation, sending the wrong message to investors).

Other suggested next steps from the workshop include:

 There should be an effort to map and coordinate existing government and cooperate CSR initiatives around bridging the digital divide, (such as initiatives from NITDA, Tetfund, MTN, e.t.c) with the aim to avoid waste, redundancy and duplication of efforts, and to promote program effectiveness

 Exploring partnerships on the NIGF-led auditing of government websites with a focus on relevant content and services as well local language information for women such as in health, rights, and other services that promote their wellbeing and empowers them.

 Civil Society Organizations such as WAAW & HighTech Center for Women also discussed some of the policy challenges they face such as bureaucracy in government processes, and emphasized the importance of government partnerships in order to scale their activities.

The workshop was very successful, and marked another milestone in the civil society effort to close the gender gap in ICTs in Nigeria.

Government Stakeholders represented at the Workshop include:

Other organizations present include:

 The HighTech Center for Women and Girls