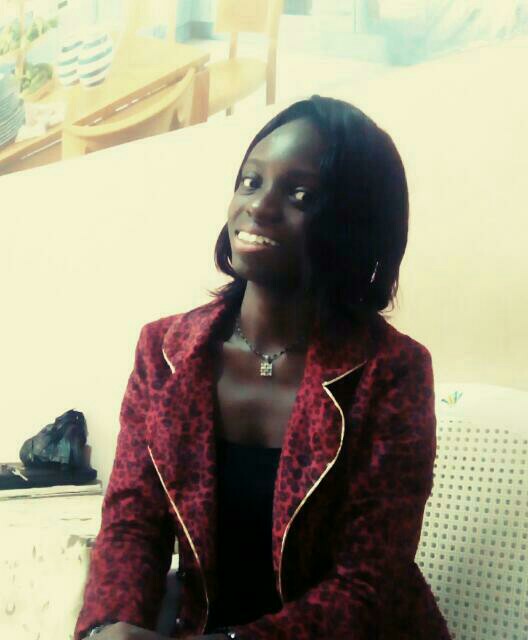 Every story has its beginning and Brenda Okoro’s story must be told from its very beginning. Brenda’s programming passion was born out of deep curiosity for all things technical. While in Secondary School she had a friend who was exposed to computers early so Brenda would usually go to her house and beg to be allowed to play with her personal Computer (to play games of course!). When fancy mobile phones started evolving, Brenda’s Mom bought her an LG flip phone which she used to play games. However, she noticed that every time she launched a game application, an image popped up with the text ‘Java’ so that triggered her to begin researching what Java was all about.

While in secondary school also Brenda studied Computer Science which did not a great impression on her. She, however, learnt how to draw using the paint application at that time. When she completed secondary school, Brenda told her parents of her desire to attend a computer training institute. Luckily they agreed and enrolled her in a 6-months diploma program while she continued seeking admission into a tertiary institution. During the training, Brenda was introduced to QBASIC, her very first programming language. She did well in the training and finished with a distinction and was offered employment in the computer institute.

In 2012, when Brenda gained admission into Obafemi Awolowo University (OAU, #GreatIfe) to study Computer Science & Engineering, she dreamt of making a first class. She also planned to make a meaningful societal impact through the use of information technology. While she did not make the first class, she did succeed on the second objective of acquiring tech skills for social development.

The tech for good journey took one fateful day when a team from Paradigm Initiative landed on the OAU campus. The team was visited Brenda’s department in OAU and students were asked to wait behind after lectures. The Executive Director of Paradigm Initiative, Mr. ‘Gbenga Sesan, who spoke to the students, narrated his success story to the students and encouraged them to think outside the box in their pursuit of career success. When Sesan, himself an alumnus of OAU, concluded his speech, his team introduced the student to TENT (Techie Entrepreneurial Nigeria Talented, now TECHTIARY), a new program Paradigm Initiative chose to pioneer in OAU.  The aim of TENT was to encourage university students to build startups/tech products & services of their own so that when they graduate they wouldn’t need to loiter around looking for virtually nonexistent jobs. At the very least TENT would help the students pick up relevant skills. The OAU students were encouraged to come up with ideas which would solve local problems around them. Some 100 students signed up for TENT at OAU that year, and Brenda was one of them.

At the first TENT Gathering (the national annual meeting of students involved in TENT in Nigeria), students were asked to present a tech idea to solve a societal problem. Brenda presented an idea delivering a health solution (later to be called MobbiCheck) which helps citizens locate the nearest health centre and provides critical health information. At the end of the three-day event, the best three ideas were chosen and Brenda’s idea wasn’t among them. Naturally, she felt bad though but was determined to succeed next time and never gave up on her idea. Brenda consulted a senior colleague in Google Developer Group (GDG) OAU on how best to develop her idea for future success. His advice, which was prescient, was for her to pick up a programming language.

Luckily Brenda’s department organized programming tutorials on Java so she borrowed her roommate’s laptop and installed Netbeans (integrated development environment for Java) on it. She attended the Java tutorials but didn’t follow through at all, because initially, everything seemed like Spanish. Then came the long break due to the university strike action so Brenda went home and was finally able to learn the rudiments of Java at the same computer training institute she was enrolled in prior to joining OAU.

Then all of a sudden, with more study and practice, Java started making sense to Brenda but she didn’t have a Personal Computer to practice with so she usually went early to the training institute to do assignments and practice. Then the University strike was called off and Brenda went back to school. It was during this term she was introduced to Python but it was mostly theory. Like most students, Brenda opted for the usual ‘cram and pass’ reading. However, her recent knowledge of Java helped her flow much more easily with the course.

In her second year at OAU, as part of TENT OAU activities ahead of 2013 national TENT Gathering, Brenda was asked to build a prototype of the idea she submitted in the last competition. She again asked a senior colleague the best implementation course for the project and he suggested building the prototype on J2ME (Java 2 Mobile Edition). Brenda travelled all the way back to school, borrowed a computer from a friend and learnt J2ME, implemented the prototype on a Nokia phone and presented it during TENT gathering 2013. At the end of the event when the 3 best prototypes were chosen, Brenda’s project was selected and was chosen to partake in Paradigm Initiative’s TENT Angel Investment Scheme – which is a program of long-term support for technopreneurs, created with the support of Nick Jekogian, a board member of Paradigm Initiative and an entrepreneur based in the United States. This represented a victory and change of fortune for Brenda, whose project now received funding and support from one of the leading organizations working in digital inclusion in Africa.

When school resumed Brenda became a superstar and received a lot of calls from participants, congratulatory messages from her course mates and from her lecturers. She became so popular and got her first laptop as a gift from her Mom. She later joined a research lab (iLAB) to sharpen her skills and find team members because an important expert advice and feedback she obtained during TENT 2013 was to work with a team to improve her project’s chances of success. Later that year the Open Technology Movement (OTM) was organized on OAU campus and there she met her team mates. There the new team extensively discussed Brenda’s TENT project and decided to implement it on the Android platform. They also chose a name for the new app – MobbiCheck. Brenda’s knowledge of Android development was limited at the time so she left the implementation to a member of her team who was an Android developer.

As the head of the team, Brenda’s plan was to implement MobbiCheck on both web and mobile so she had to allocate tasks among her group members. Although this division of labour seemed to work for a while, the team eventually fell apart and Brenda was devastated, torn apart and broken. She didn’t know what to do but somehow found the strength to move on. Fortunately she had a plan B, an emergency team. Essentially this involved calling her friends that were very good developers and together they were able to build something worth presenting within a few hours to 2014 TENT gathering held at Benson Idahosa University Edo state. The TENT gathering was a success that year and there were 11 participants from OAU Ife alone. Against all odds, Brenda’s team had a good outing at the TENT program.

Brenda reorganized her team after settling disputes and misunderstandings.  The team also changed their focus to major on Android development. Luckily, Android Code jams organized by the Google Development Group (GDG) had begun at that time so she used the opportunity to learn Android in-depth. During this process, the project lagged behind as a result of the time spent trying to set up the Android studio. The increasing workload of university 300 level courses at OAU Ife too did not help matters. So Brenda opted for online tutorials to help bridge the time and knowledge gap. The project however suffered as Brenda struggled to balance school work and her entrepreneurship pursuits.

TENT gathering 2015 was once again approaching and Brenda, now in 400 level, was already attached to an organization for SIWES (Students Industrial Work Experience Scheme). During her SIWES she worked as an Android developer and improved her skills in Android but was so tied up with SIWES work that she had little time to focus on her TENT project.

When it was time for final year projects, Brenda chose to work on a home automation project to control appliances using voice activation. Although it was the model for the TENT program, she couldn’t use her TENT project as her final year project because it was purely software and her departmental requirements required her to work on a hardware project as a computer engineer. At this stage she was sufficiently proficient in Android development and so could assist her team in the development. In the meantime, a member of her team graduated and got a job and couldn’t continue so yet there was a critical manpower shortage in her team. There was pressure now to Brenda to give up but she didn’t. She instead went for yet another Tech event – a hackathon organized by Konga and participated with a makeshift team of three for the event. Her team members, on hearing of her Mobbi-check project decided to become her project team members. It was then decided to change the Mobbicheck user interface and add content to it. The team then made considerable progress, and Brenda became more experienced in balancing this project with her school work.

At around this time, Brenda got a scholarship for the Udacity Android development Nanodegree. She was elated and immediately downloaded the videos and got busy with projects. There was also a deadline to launch the app on PlayStore before the end of November 2017 as there was a planned presentation of the finished product in Lagos during Techiary Forum 2017. Just towards the end of October however her Nanodegree training was terminated because she did something against the rules (unintentionally). This new setback devastated Brenda and she became somewhat depressed to the point of deciding not to code again. Nevertheless, somehow she did not give up, in part as a result of encouragement from her sponsor and mentor who encouraged her to keep learning even though she wouldn’t get the certificate from Udacity.

November 2017 is one month Brenda won’t forget in a hurry because she worked round the clock to complete the MobbiCheck app ahead of the deadlines imposed by Playstore and the Techtiary team. As a result of the closeness of the deadlines, Brenda met a friend to help work on an app feature while she focused on other aspects of the project. Together they completed the app and launched it on Playstore. This represented a major breakthrough and milestone for her. In the feeling of elation, joy and fulfillment that followed, Brenda shared the link to the app with a few of her contacts to get feedback for improvement of a better version. All considered, in Brenda’s own reckoning and I’m sure many will agree with her, MobbiCheck is gearing up to be a success story. The MobbiCheck app, which helps Nigerians locate local health care centres closest to them and provides important health information, is a story of a locally developed solution, and how its development is overcoming the odds usually stacked against technopreneurs in Nigeria.

You can check out MobbiCheck on the Google PlayStore via the link: