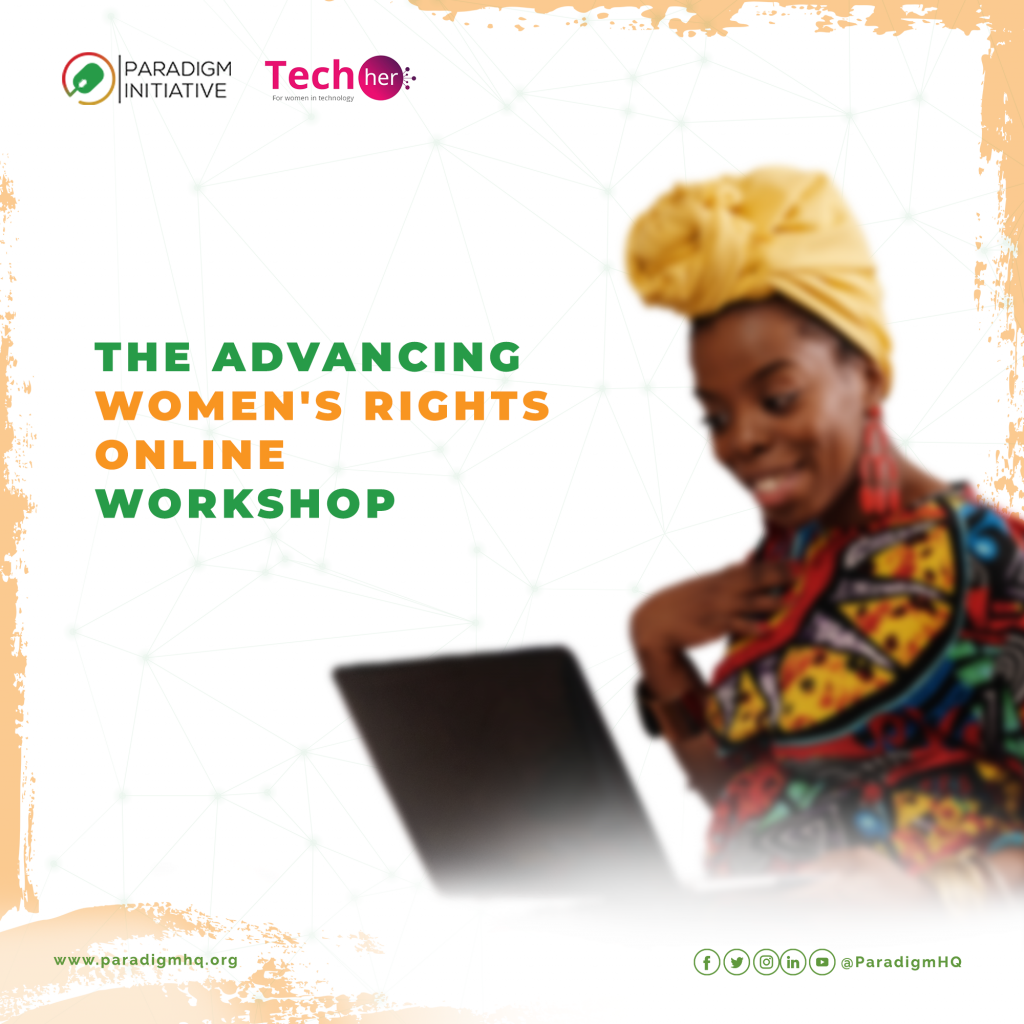 In a digital age, sexual and gender-based violence transcends our traditional understanding of it to more unconventional methods. Recognizing what these methods of violence are will help society curb it and give women and girls better access and opportunity. United Nations Declaration on Elimination of Violence against Women defines violence against women as any act of gender-based violence that results in or is likely to result in physical, sexual, psychological, or economic harm to women.

Violence Against Women and Girls (VAWG) is already a problem of pandemic proportion; research shows that one in three women will experience some form of violence in her lifetime and online violence stands to increase that number.
Online violence against women as defined by the Associative Press for Progressive Communications (APC) are acts of gender-based violence committed, abetted, or aggravated in part or fully by the use of information and communications technologies (ICT) such as mobile phones, the internet, social media platforms, and email.

Many do not recognize this menacing form of violence and its staggering effects and It is for this reason that on the 24th of February 2021 Paradigm Initiative in collaboration with TechHer, powered by the Web foundation organized a closed-door policy maker workshop to bring the issues forward and address the ways forward.

Paradigm Initiative and TechHer targeted Government ministries, government agencies, and civil society organizations making a difference in the spaces affecting women. We hoped to bring to their attention through our “ADVANCING WOMEN’S RIGHTS ONLINE WORKSHOP”

The workshop had a 3 part agenda; To break down and contextualize online violence and its effects, a look into the legal framework surrounding online violence as it is in Nigeria, and a peak into solutions using technology using UNSUB as a case study.

Soibomari Seddon, a first responder to Sexual gender-based violence during the COVID-19 pandemic and former programs officer at Stand to end rape brilliantly led the session on “Online Violence Against Women: A Break Down”.

There were many gems from this engaging session such as how most types of violence that can be perpetrated offline can be done just as well online. She highlighted that the first step to addressing online violence against women is to recognize that it is a legitimate and harmful manifestation of gender-based violence. Online violence presents itself in many forms including sexual harassment online, slut-shaming, cyberstalking, trolling, targeted hate speech, identity theft, doing, and threats of corrective rape.

Online violence she noted is often downplayed, ignored, and underreported. In a country like Nigeria with a broken down analog system of justice, the police hardly take offline violence seriously, so reporting online violence will most likely be an exercise in futility.
Soibomari narrated Nigerian Twitter’s recent trends of people spamming the pages of women speaking up against oppression with football commentary.

“Men threaten women with corrective rape for opening differently on gender issues. A popular Kannywood actress is often trolled and at the mercy of violent mobs such that she had to produce a teary apology video for simply showing her back. A young woman breaks up with her abusive boyfriend and in days private information that could endanger her is published online.
A young mother attends a concert and has to lock her account to be free of trolls whereas there are sympathy and understanding for a father who abandoned his wife at a hospital with a stillbirth, we all grieve differently. A group of women who strategized and mobilized the country’s most successful nationwide protests is always the subject of endless scrutiny and criticism but a proven male saboteur is still being given the benefit of the doubt. Sometimes online violence can present in more subtle ways like attacking women for shared views with men but the men often get zero vitriol. Women are always trying to get accounts that have stolen their identities suspended. Some women have already been marked as vocal and no matter what they say, are often at the receiving end of trolling.”

Many women in these cases have had to delete social media entirely, taking away their access to information and communication. For many women these situations have real-life consequences, causing them to fear for their lives and ultimately affect their jobs, interactions, and communication with society.
With most of these cases going unreported, the actions go mostly without consequences as Soibomari called, that as a community we cease perpetrators to thrive and make a statement of zero tolerance.
After laying the brutal foundation and giving context, Judith Takon then went ahead to present the policy brief she authored for Paradigm Initiative titled
“ONLINE VIOLENCE AGAINST WOMEN DURING THE COVID-19 PANDEMIC”.

The outbreak of COVID19 came with global economic downturns, restrictions in movement, and government-imposed lockdowns which had profound effects on the safety of women and girls globally especially in developing countries like Nigeria. United Nations Declaration on Elimination of Violence against Women defines violence against women as any act of gender-based violence that results in or is likely to result in physical, sexual, psychological, or economic harm to women.

Even before COVID-19 existed, domestic violence was already one of the greatest human rights violations. This violence increased alarmingly during COVID-19 with its impending lockdown and restrictions. Women and girls who were previously shielded from abuse by existing structures of school and work were now trapped with their abusers at home for hours and days on end. Gender-Based Violence (GBV) is reported to have significantly increased since the lockdown began on 30 March 2020 in the three most affected areas (Lagos State, Federal Capital Territory [FCT] and Ogun State) ”

Compelled to stay at home due to the pandemic, more people have turned to technology as a substitute for physical interactions. The internet is the decisive technology of the information age and despite the vast inequality in access and usage due to economic, social, and cultural impediments, it continues to transform billions of lives daily.
The vast inequality in access and usage of digital technology is shown to be ascribable to economic, social, and especially cultural obstacles.

The policy brief cited the legislative landscape of Online violence, some of which are:
The 1999 Constitution Of The Federal Republic Of Nigeria
Criminal Code/Penal Code
Cybercrime Act 2015
Violence Against Persons (Prohibition) Act 2015 (Vapp Act)
Convention On Elimination Of All Forms Of Discrimination Against Women (Cedaw)

The Policy Brief went ahead to cite recommendations to make the online space more accommodating for women.

RECOMMENDATIONS
ENACTING APPROPRIATE LEGISLATION ON ONLINE VIOLENCE
GRASSROOT REORIENTATION/SENSITIZATION ON THE DANGERS OF ONLINE VIOLENCE AGAINST WOMEN
Internet Intermediaries playing their part in mitigating the risks of online violence against women. According to a report by the Broadband Commission Working Group, tech companies need to explicitly recognize cyber violence against women and girls as unlawful behavior and demonstrate increased and expedited cooperation in providing relief to victims/survivors within the capacities that companies have.
It has been established that digital inclusion and access is a right, not a privilege and that the digital world contains several benefits to women.

Finally, Khadijah Awwal, the project lead of UNSUB, an app available on AppStore told the attentive audience how she and her team created an app that connects first responders and allows people to report sexual offenses, report them anonymously and report them on behalf of someone else. They connect victims to hospitals, mental care, and law enforcement.

Khadijah showed us that with commitment and innovation we could make a world of difference.
After Which many of those in attendance contributed beautifully to the way forward. One of which was Dorothy Njamanze of the Dorothy Njamanze foundation saying that advocacy goes beyond the English language and should be translated and interpreted through grassroots mobilization for a wider reach.

Having been widely attended by about 43 different organizations in government and CSOs, Paradigm Initiative is proud to have initiated a conversation among them that will shape the future to come as we set out to host another workshop on the 19th of March, 2021.

PrevPreviousSimon Faith: I have all it takes to rule my world.
NextCall for Applications: Research AssistantsNext