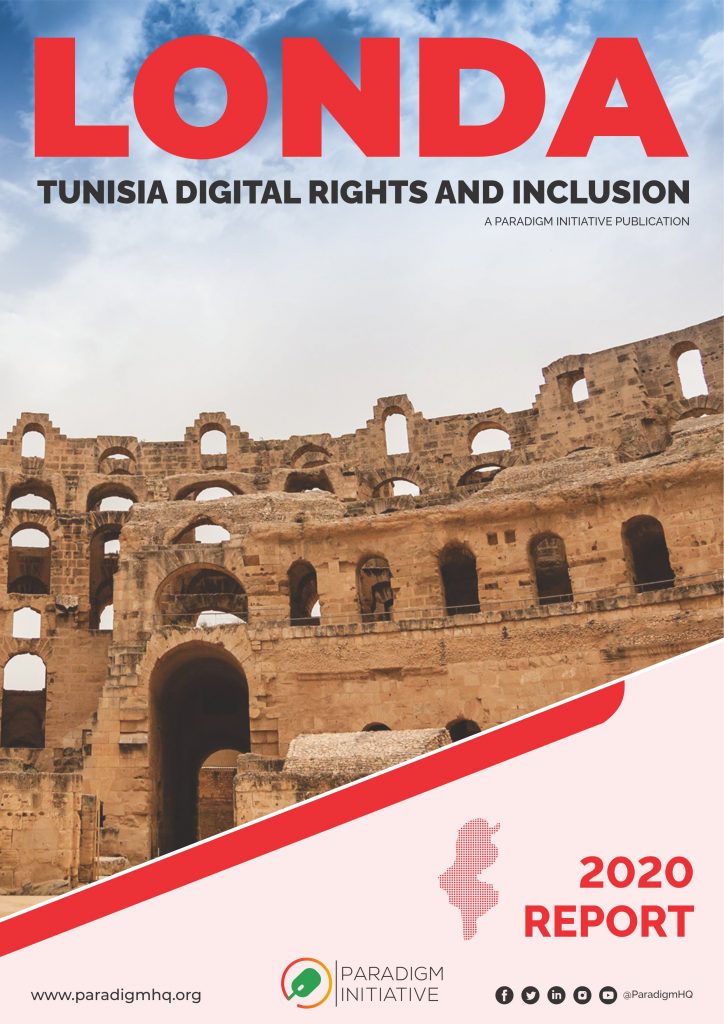 Tunisia is a North African country of around 11 million people. After the ousting of a long time dictatorship regime, Tunisia began a transition to democracy in 2011. For the past decade, the country has been undertaking ongoing reforms. However, the history of censorship and the slow pace in reforming the legal framework, as well as economic struggles, have challenged the state of freedoms and respect of digital rights.

For the purpose of providing network coverage in areas with a low population density, the Ministry of Technology, Information and Digital Transformation, after a national call for tender, has contracted the operator Tunisie Telecom for the implementation of broadband coverage in these areas. The project’s implementation reached 90 percent at the start of 2020. It is expected to cover over 47 delegations in 15 governorates and benefit 164 schools, 59 basic health centers and 180,000 inhabitants.[4]

3.     Impact of COVID-19 regulations on digital rights and inclusion

The Covid-19 pandemic has had an impact on the telecommunications sector in Tunisia. This impact translates into a change in consumer behavior. Tunisia, like most countries in the world, confined its population during the period of the second quarter of 2020. Internet consumption soared as soon as the general health lockdown was announced in March 2020.[5] According to statistics for the second quarter of 2020 provided by the Tunisian National Telecommunication Authority, the average daily consumption in ADSL, LTE TDD and mobile data offers on smartphones per subscriber is respectively 5.8 GB, 4.5 GB and 521 MB, up 22.7%, 114.93% and 67.5% compared to the second quarter of 2019.[6] This could be in part explained by employees shifting to working from home, students studying online, and the rise of e-commerce.

In response to the growing connectivity needs and the additional traffic demand in densely populated areas during the quarantine period, telecommunications operators and internet service providers have deployed new resources and offered special plans to increase their bandwidth capacity and avoid an internet blackout risk.[7]

Students were granted free access to educational platforms.[8] However, in contrast to universities, public schools did not provide online platforms for pupils to pursue their education and take their exams. The Ministry of Education instead broadcast courses on national television. The possibility of nationwide online education in schools could not be fulfilled for many reasons, including the digital divide between households and regions.

A number of initiatives, resulting from joint efforts between the government, civil society organizations and the private sector, have been launched since the start of the pandemic in order to bridge the digital divide and provide children from low-income families with laptops and an internet connection. Other initiatives have focused on building resources to update citizens on the spread of the virus, in an effort to ensure citizens’ right to access information. For instance, covid-19.tn, an accessible online portal , provides the latest updates and informs citizens about the Covid-19 symptoms.[9] For reference, in March 2016, Tunisia adopted a basic law on the right to access information. The law guarantees access to information held by government bodies including ministries, the presidency, publicly funded NGOs, the parliament, local municipalities, the central bank and constitutional bodies.

The Ministry of Health launched a free and anonymous online survey aiming to optimize the care of patients by the emergency services by letting users answer 12 quick and easy questions.[10] The results were expected to help identify locations requiring intervention, in particular in terms of screening tests.

On a more controversial note, in June 2020, the Prime Minister also confirmed the government was tracking citizens’ movements anonymously through their SIM cards.[11] The Ministry of Communication and Digital Economy released a statement to clarify that the tracking relied on general data from mobile phones between regions and respected legal requirements for personal data protection, and that the Ministry was in consultation with the National Authority for the Protection of Personal Data (NAPPD). NAPPD released a statement confirming that it had advised the government regarding the deployment of a number of tracking applications. So long as individuals’ anonymity is ensured, the program does not violate the legal provisions related to the protection of personal data.[12]

Later on, the Ministry of Health announced the adoption of E7mi,[13] a contact-tracing mobile application that collects users’ phone numbers and uses Bluetooth signals and location data to detect and alert users who may have had contact with someone infected with the COVID-19 virus. The download of this mobile application was at no stage mandatory.

However, Access Now, a digital rights organization, stated that even though the National Authority for the Protection of Personal Data confirmed that the application complies with Tunisia’s 2004 Data Protection Law, the law “is outdated and does not account for technologies developed since it was written.”[14]

The current Data Protection Law is not the only legal text criticized by the digital rights community. The 2014 constitution that was approved following the 2011 revolution was highly praised for guaranteeing the right to privacy and personal data protection; the right to access information and communication networks; and the right to free expression and freedom of the press. However, the text contains vague language tasking the state with “protecting the sacred”, which could act as a constitutional restriction on internet freedom.[15]

For instance, Article 86 of the Telecommunications Code states that anyone found guilty of “using public communication networks to insult or disturb others” could spend up to two years in prison and may be fined up to 1000 dinars.[16] Based on that article and others in the Tunisian Penal Code,[17] in November 2020, Wajdi Mahouachi, a blogger, was sentenced to two years in prison by the Tunis First Instance Court for posting a video on Facebook that denounced a Tunis public prosecutor’s failure to arrest and open an investigation against an extremist preacher.[18]

Between April and May 2020, bloggers Hajer Awadi and Anis Mabrouki were arrested and charged with offences including “insulting a civil servant” and “causing noises and disturbances to the public” under Articles 125 and 316, respectively, of the Penal code. They had both posted videos on Facebook criticizing government corruption and its poor handling of aspects of the health crisis. Mabrouki was acquitted, but Awada and her uncle were both sentenced to a 75-day suspended prison sentence.[19]

In July 2020, the Court of First Instance in Tunis convicted another blogger of “inciting hatred between religions through hostile means or violence” under Articles 52 and 53 of the Tunisian Press Code, for sharing a Facebook post of a text that imitates verses from the Quran to make fun of the COVID-19 situation. She was sentenced to six months in jail and ordered to pay a $700 fine for the post.[20]

Human rights organizations, including Amnesty international and Human Rights Watch, have raised the alarm about these recurring arrests that may lead to more oppression and self-censorship.

At the start of the coronavirus pandemic in the spring of 2020, a draft law to combat disinformation that had been proposed by a member of parliament faced a backlash, resulting in its being withdrawn one day later. The bill sought to criminalise the “disclosure of any false or questionable speech among users of communication networks and social media platforms, which may be insulting to individuals, groups or institutions.” According to civil society groups, it was seen as a direct threat to freedom of expression and, since it employs vague language, it could be used to silence online activists.[21]

The findings presented in this report confirm the ongoing challenges Tunisia faces in ensuring the protection of digital rights. As 2020 marks the tenth anniversary of the uprising that toppled the 23-year-rule of an autocratic president, the Tunisian digital space presents an arena for citizens to express opinions about politics and society and to hold governments accountable. Therefore, it is essential to make further progress in reforming the legal framework as well as deploying more efforts to minimize the digital divide for an open inclusive internet in Tunisia.

[4] Ministry of communication technologies and digital economy, “Core list of ICT indicators Country: Tunisia Core indicators on access to, and use of, ICT by households and individuals,”, June 2020

[11] Mosaique FM, “We monitored the respect of health quarantine through Tunisians’ phones,” June 14, 2020,

[12] Tunisiatv, “Clarification regarding the government’s use of an application that monitors citizen movements”, June 15, 2020,

[21] Accessnow, “Tunisia’s Parliament on COVID-19: an initiative to fight disinformation or an opportunity to violate fundamental rights?,” April 1, 2020, https://www.accessnow.org/tunisias-parliament-on-covid-19-an-initiative-to-fight-disinformation-or-an-opportunity-to-violate-fundamental-rights/