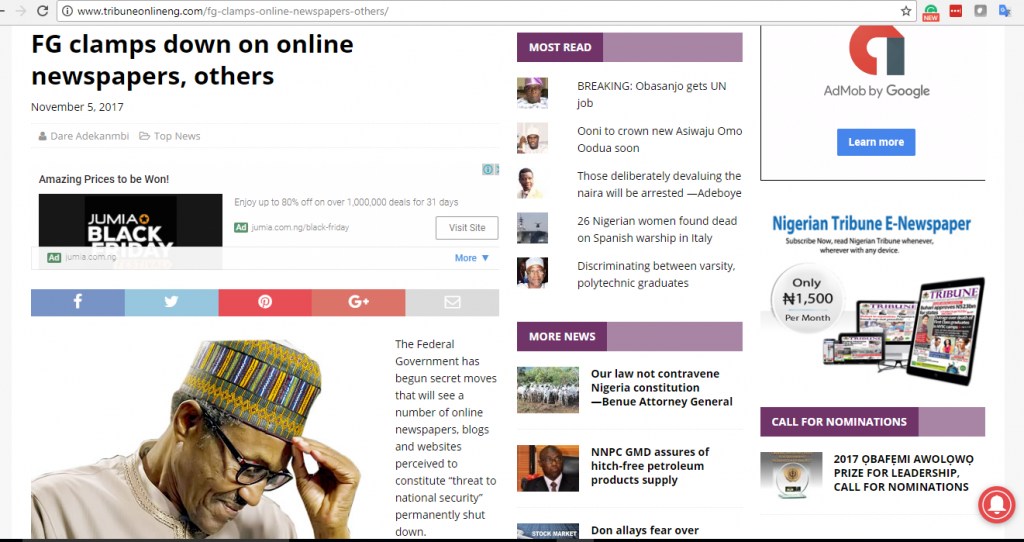 Paradigm Initiative has expressed serious concern over alleged Federal Government’s secret attempts to block the domain names of several identified websites accused of threatening national security in Nigeria. These attempts are an unacceptable violation of constitutionally and globally guaranteed rights of expression and information.

According to a report published in the Nigerian Tribune, the Federal Government is alleged to be currently carrying out this operation through the Nigerian Communications Commission (NCC), ostensibly hiding behind Section 146 of the NCC Act 2003. The section, which provides generally on the duties of a network licensee to assist the Commission in preserving national security and preventing the commission of a crime, must not be used by the Federal Government to intimidate online news providers and infringe on their rights.

According to Paradigm Initiative’s Program Manager Magoyi (ICT Policy), Adeboye Adegoke, “Section 39 of the Constitution of the Federal Republic of Nigeria expressly provides that every person shall be entitled to freedom of expression, including the freedom to hold opinions and to receive and impart ideas and information without interference. Article 19 of the Universal Declaration of Human Rights provides similarly that everyone shall have the right to freedom of expression. This right shall include freedom to seek, receive and impart information and ideas of all kinds, regardless of frontiers, either orally, in writing or in print, in the form of art, or through any other media of his choice”

While commenting on the development, Paradigm Initiative’s Director of Programs, Tope Ogundipe says that “whatever process is underway by the influence of the NCC and the NSA would result in a violation of the Constitution and should, therefore, be halted. The Federal Government should desist from covert acts as such and should instead release a list of such sites purportedly threatening national security and follow the due course of the law in handling this matter transparently.”

Mrs Ogundipe further states that in an already declining society which pays minimal regard to the freedom of expression and press freedom, a dangerous precedent would be set if the NCC goes ahead with this plan to restrict access to certain websites in the Nigerian Cyberspace.

While speaking further on the development, Program Manager, Magoyi (ICT Policy), Adeboye Adegoke said that, “The right to receive information and the right to give information is expressly codified in legal instruments recognized in Nigeria and so it would be sheer defiance by the NCC to attempt to make a derogation in such a manner”

Paradigm Initiative has noted the denial of this censorship plan by the Minister of Communications, Alhaji Adebayo Shittu, stating that he was not aware of any plan by the Nigerian Communication Commission (NCC) to gag online newspapers. The Honourable Minister should go a step further to investigate this claim and make a commitment to press freedom and unhindered internet freedom. On its part, Paradigm Initiative will continue to monitor the development and will deploy every legitimate advocacy tools to get to the root of it in ensuring that fundamentally guaranteed rights of citizens are safeguarded.

If you would like more information about this topic or further project description on Paradigm Initiative’s Magoyi (Advocacy) work, please send an email to Adeboye Adegoke via hello@paradigmhq.org.