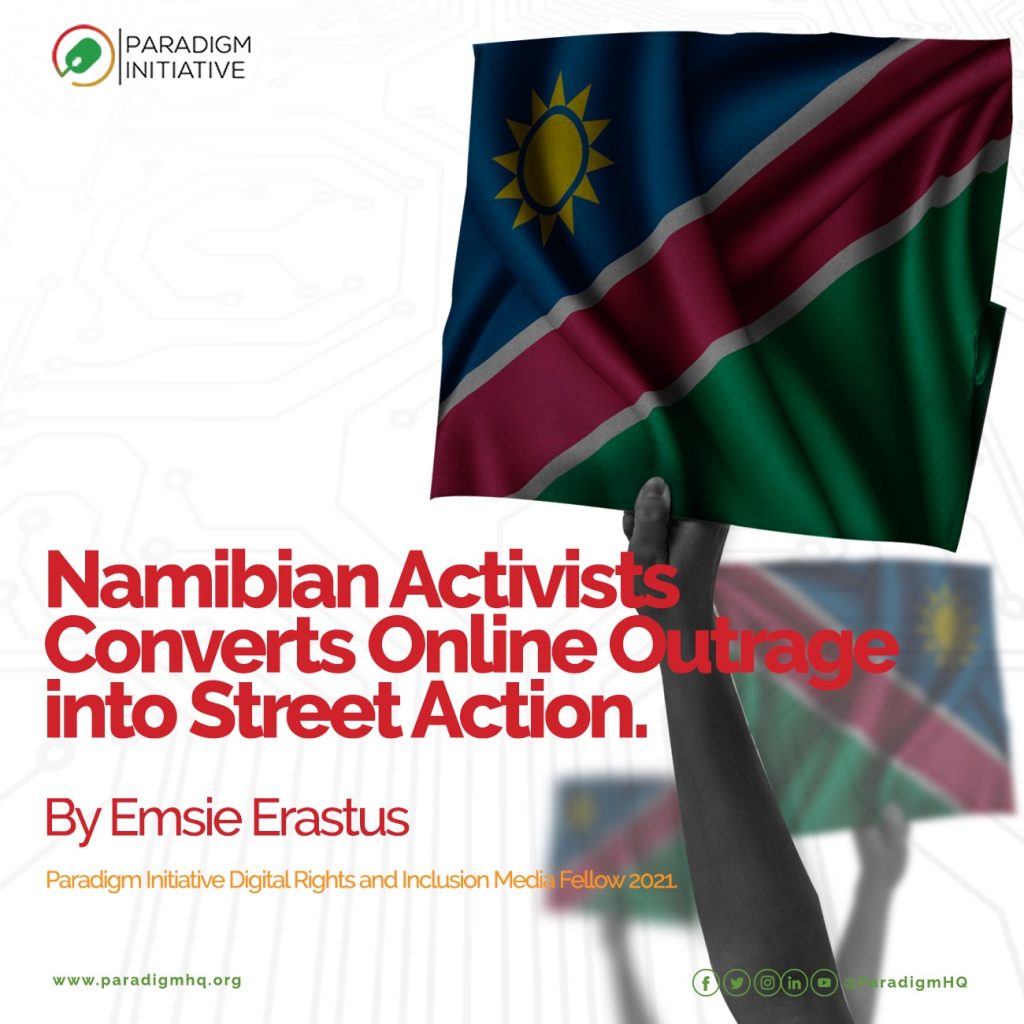 The year 2020 has seen a rise in digital activism in Namibia, mainly spearheaded by young people. In October 2020, the body of 21-year-old Shannon Wasserfall was discovered in a shallow grave in the dunes six months after she was reported missing near her hometown, Walvis Bay. On Twitter, anger brewed from social media to the streets and nation-wide protests followed with young people calling for a total shutdown of all activities in Namibia until the Government tackles sexual and gender-based violence. The anti-femicide protestors used #ShutItAllDownNamibia to reach a wider audience. According to Simon Kemp’s 2021 DataReportal, Namibia, with a population of around 2,5 million people, has over 1,30 million internet users with over 800 000 social media users. Ndiilokelwa Nthengwe, a gender activist who was instrumental in the #ShutItAllDownNamibia movement, said the importance of online activism speaks to a broader conversation and the collective power it yields, “you captivate a wider audience and you sensitise them with your ideas for reform further,” said Nthengwe. She started using Twitter to advocate for minority rights, in both a personal and professional capacity, however her level of activity has increased over the years. The #ShutItAllDownNamibia protests saw unprecedented numbers of mainly young people in various towns in Namibia taking to the streets in October 2020. Omar van Reenen started using Twitter as an advocacy tool at university where he studied Political Science and Gender & Sexuality Studies. “I organised the largest civil rights protest in my college town for the Black Lives Matter movement, where we reformed the Municipality of Oswego’s police department in New York, USA to divert more funding into community resources,” added the young activist. Van Reenen co-founded the Namibia Equal Rights Movement, an advocacy group seeking to advocate for LGBT+ rights. Recently, van Reenen led another protest in Windhoek when a same-sex couple’s twins, born through surrogacy in South Africa, were denied entry and citizenship in Namibia. Namibia inherited a Roman-Dutch colonial sodomy law, though the law is not strictly enforced in the country, activists are calling for its removal. In 2016, Ombudsman John Walters was reported by The Namibian newspaper saying that no prosecutions took place in Namibia under the law, however, Walters and activists say the old sodomy law is past its sell-by date. For van Reeden activism (either off or online) has to be intersectional. Van Reeden echoed that movements before him were not as inclusive, thus intersectionality is something he aims to encompass. Intersectional activism aims to bring (in)visible bodies into view, embodying aspects of gender, sexuality, race, and disability. “Movements that are not intersectional bear the risk of continuing the very oppressive system we are challenging,” said van Reeden. Linda Baumann, who has worked with various LGBT+ advocacy groups for years, welcomes such digital advocacy. “Young people have learned that their voices with no restriction come through the social media handles and what they have done is to utilise the space to mobilise each other and radically engage how the state restrictions impact them,” said Baumann. Additionally, Baumann is hopeful with this form of advocacy as it speaks for minority groups who have been sidelined in society. For Baumann, the internet sphere is populated with young people who have the information and understanding of sexuality and gender diversity. Something that according to her is needed in transforming policies in Namibia. For young people such as Van Reenen, contentious political engagements online speaks of a new era.

PrevPreviousThe Next Best Time To Restore Data Rights Is Now!
NextREQUEST FOR PROPOSALS: INDEPENDENT PROJECT EVALUATION OF PARADIGM INITIATIVE PROGRAMS AND PROJECTS (2007 – 2020)Next