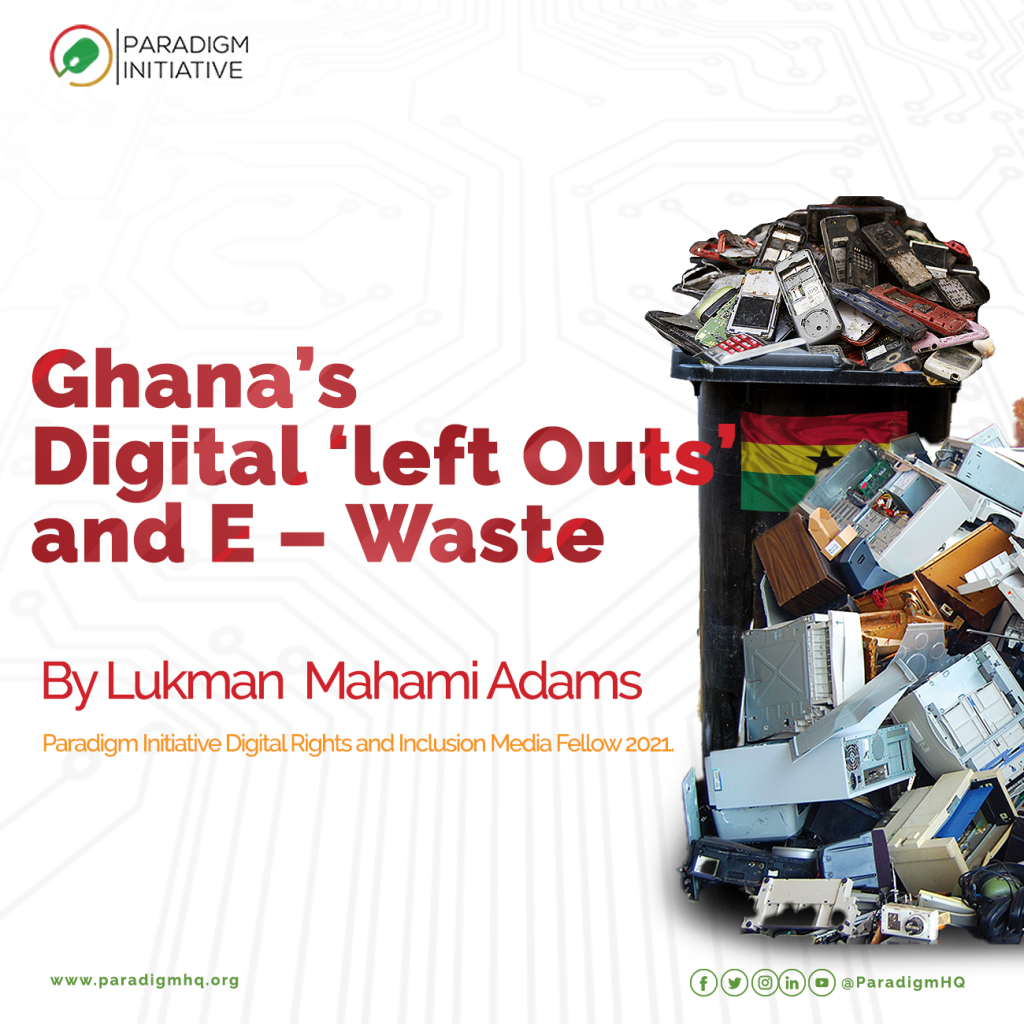 For this reason, this article intends to examine an incongruity in Ghana’s digital technology industry and how it devastates human health. Human health is an uncompromising aspect of human development and thus must be upheld in high esteem. This paper simply talks about electronic-waste in Ghana which involves persons who are digitally marginalized. They do not have access to digital technology yet their health keeps deteriorating as they deal with the end products of digital technology in order to earn a living. This can be attributed to regulatory failures on the part of governments. The effect of not having access to digital technology is that one is completely left out. Therefore, I intend to classify them as digital ‘left outs’ and not the usual digital ‘have nots’

E-waste comprises of electronic devices such as laptops, smartphones, tablets and televisions that have outlived their useful life. Sepúlveda et. al (2010). Once these devices are of no benefit to its original users, next is dumping and recycling. Caravanos et al. (2011) estimates that 20-50 million tons of e-waste is generated per year of which 75-80% is shipped to countries in Asia and Africa for recycling and disposal. According to the Director for Chemicals Control and Management at the Environmental Protection Agency (EPA), ‘22, 575 e-waste were imported into Ghana in 2009.’ Pwamang (2013). This estimation begs the question; ‘why Africa and does Africa have e-waste recycling systems and plants talk less of handling such huge tons?

Caravanos, et al (2011) believes that e-waste, deemed obsolete by the global north is still useful to the global south which accept e-waste items as second-hand donations. In Ghana, the inability to buy new laptops, smartphones, coupled with the quest to keep up with the global advancement in technology, has led to massive importation of second-hand gadgets from the global north. Robinson (2009). That said, Africa is the hub for e-waste not necessarily because of their capacity to recycle, but rather a form of donation from the West in order to bridge the digital divide. This importation is enshrined in the Basel Convention on Controlling Transboundary Movements of Hazardous Waste and their Disposal (1992) which clearly outlines regulations for member countries on how to deal with e-waste in less harmful conditions. Interestingly, Ghana has been a signatory since 2003 and its expected that all persons of member countries who engage in e-waste management must do so, strictly under healthy conditions. Unfortunately, this is not the case with e-waste collectors and recyclers in Ghana’s ‘Agbogloshie’. A quick online search on electronic waste and air pollution in Ghana would lead you to inundated stories from Agbogbloshie. Spitzbart (2021) asserts that Agbogbloshie is globally known as the epitome of improper e-waste recycling.

Caravanos et al. (2011) revealed that personal air samples collected from workers and the environment at Agbogbloshie contained elevated levels of aluminum, copper, iron, lead and zinc. More than half of the samples taken were above the US Environmental Protection Agency standard for lead in soil.  In developing countries where e-waste is dismantled and recycled by hand, harmful chemicals and plastics are introduced into the environment via water, air and soil. Workers burning the e-waste to retrieve valuable metals and other materials for sale are exposed to harmful chemicals such as heavy metals, PAHs and inorganic acids. Robinson (2009). Asampong, et al (2015) states that these workers are poor to the extent that they can’t even get proper health care services when they fall sick because most of them are not on the country’s National Health Insurance Scheme. As a result of the level of poverty amongst the workers, they resort to traditional medicines which costs 2 to 3 Ghana cedis (less than a dollar). A clear case of how digital inequality leads to health and economic inequality and underdevelopment. These workers are mostly the youth as Sepúlveda et al. (2010) found out that 73% are aged 21 – 30 years who use handmade tools without protective clothing leaving them susceptible to respiratory diseases and overexposure to lead.

Ghana is arguably recognized as one of the sub Saharan African country with the best of laws and regulations, yet scores fairly in implementation. In 2016, Ghana passed the Hazardous and Electronic Waste Control and Management Regulations (Act 917). Also as written in Pwamang (2013) and Ababio (2012), the government is in the process of formulating an e-waste management bill which will establish among others, e-waste recycling and treatment plants and offer incentives for collection and recycling of waste. Unfortunately, almost a decade after the draft bill was laid, no progress has been made as my checks have not yielded any. One can say the common parliamentary language known to all concerned Ghanaians ‘bill died at the draft stage’. The Minister for Environment Science and Technology indicated that plans are underway to construct a $30 million recycling plant in Agbogloshie. (Enviro360, 2018). We are in 2021 and there is deafening silent from the government about the said e-waste recycling plant.

In summary, calls for formalization and regulation of electronic waste in Ghana should not be the mandate of environmental and health stakeholders but digital right stakeholders as well.