Home » Digital Inclusion » LIFE » Bringing the Service to the People

Bringing the Service to the People 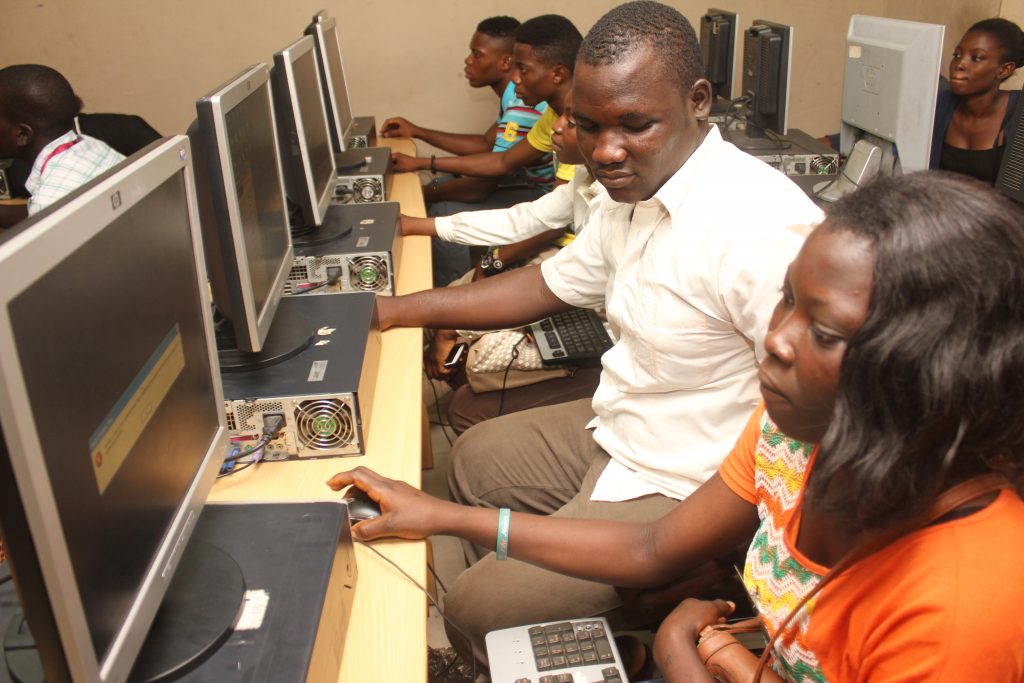 Slums typically suggest scenarios of delinquent youth, carefree parents and/or guardians, and a chaotic society. Ajegunle, the most popular and most populous slum in Lagos Nigeria (with a total land mass of 13.9 square kilometers and a population density of 120,254 per square kilometer), accounts for a significant number of unemployed youth – many of who are involved in criminal activities and various vices such as cyber-crime whose negative impact on the society are high. Considering that majority of these youth lack access to mentors who can guide them, and they also cannot afford to pay for the few opportunities that are often brought to their communities, this is not surprising. The obvious lack of alternative lifestyles is a popular excuse for the young people who have adopted criminal activities as a way of life that promises hopeful deliverance from poverty and inferiority complex. But this is rapidly changing. The L.I.F.E project; a train-the-trainer capacity building initiative uses a relay training model and positive peer pressure concept to transform this notorious slum as a model intervention for other underserved communities.

Ajegunle Innovation Centre (AJIC) is run by Paradigm Initiative Nigeria (PIN) in the heart of Ajegunle Community and hosts the L.I.F.E intervention project. L.I.F.E is an acronym that stands for Life Skills, ICTs, Financial Readiness and Entrepreneurship. Following weeks of training in ICTs, the forty applicants (selected every quarter) are also trained on entrepreneurship, financial literacy and life skills and then matched with companies to complete internships or supported to pursue their entrepreneurial interests in order to transform their lives by giving them a chance to improve their livelihoods. These youth, who would not have otherwise had the opportunity to get a job, are equipped with necessary skills and an opportunity to begin a career that may end in the pursuit of their entrepreneurial dreams or positions in the companies where they intern.

Azeez walked into the centre one sunny afternoon in 2013 with an unbuttoned shirt and a bare chest. He spoke roughly and looked every bit a typical street boy. But he had one thing going for him – he wanted very badly to learn. The center now receives a number of young people like Azeez on a daily basis, but this hasn’t always been the case. The project has been on since 2007, and initially struggled to get young people into the program due to a low level of awareness and trust. Even when people knew about the opportunity, it was difficult for them to believe that they would not be exploited somewhere down the line.  But then, peer pressure is very strong among young people, and just as much as this can translate into negative influence, it can also translate even more to positive influence. The project has raised many role models for these youth of the community.

Azeez was influenced by stories of some successful young people within his community who had passed through the project. Stories of youngsters like Famous’, who went on to work in the visa section of the British High Commission in Abuja following his training, earned enough to go back to school and earn a degree, and who now works in KPMG; an international consulting firm spread quickly in the community. There was also Esther, who interned with the United Kingdom Trade and Investment (UKTI) in Lagos and went ahead to become a software developer. Azeez was bent on being empowered financially, getting an education and then moving on to better opportunities.

Born into a family with only three surviving children of several, Azeez is the last of them. He readily admits that even within the Ajegunle slum, his family is still considered among the poorest. “Attending primary and secondary school was sheer miracle considering the financial status of my family. To crown it all, my father was unwilling.” He said in retrospect. After his secondary education, Azeez hung around motor-parks, working as an ‘agbero,’ (these are miscreants who hang on public buses, helping the driver to collect fares, sometimes extorting monies from motor-park drivers and also working as political thugs for politicians sometimes). But being admitted into the L.I.F.E program radically changed Azeez’s life. After his training, Azeez was placed on internship with DHL Nigeria by PIN. He worked with DHL for six months. In those months, he was able to take some of his friends off the streets and introduce them to the L.I.F.E program. He used to be one of the most popular street boys and he had his own following. When he completed his training and a small graduation ceremony was held at the community town hall, Azeez’s previously ‘uninterested’ father was present. More parents/guardians are coming into the AJIC, making enquiries, and picking up forms for their wards. An ardent mother once said to us; “You must do for my son what you did for *Mama John!” More young people in Ajegunle are saying ‘no’ to the negative pressures of their peers and criminal activities and are pursuing with passion a proven and wholesome opportunity that includes capacity building, work placement, an opportunity to give back and the overall mission of improving their livelihoods and those of their families.

Since leaving DHL, Azeez has taken entrance exams into the university and is now studying at the University of Ilorin, Kwara State, one of the foremost tertiary institutions in Nigeria. At a time when criminal activities (especially cybercrime) among young Nigerians was fast becoming a global identity for the nation, the L.I.F.E project stepped in to provide much needed reform for young people living in underserved communities in Nigeria. The project extended to Aba, Abia State in 2014 and is resident in an equivalent of Ajegunle Community (Ngwa Road), in the Aba town of South-East Nigeria. Baseline Studies are currently ongoing in North-West Nigeria for determining a suitable location for the project in that region.